Yandal Resources has acquired a 100% interest in a significant number of strategically located tenements in Western Australia which are prospective for gold.

The Ironstone Well, Barwidgee and Mt McClure Projects are located within the Yandal Greenstone Belt to the southeast of Wiluna.

The Yandal Greenstone Belt had minimal exploration until the early to mid-1980s and it was not until the early 1990s with the discovery of the Bronzewing and Jundee gold systems that the belt was considered fertile for large gold deposits.

Since the Bronzewing gold discovery in 1992, the Yandal Greenstone Belt has had modern exploration by various exploration companies.

This exploration especially in the areas of the Ironstone Well and Barwidgee Projects has largely been ineffective due to drilling of holes that were too shallow to penetrate transported or depleted cover sequences.

Although there are no known historical workings within the Ironstone Well project, previous exploration has identified several drill ready targets with the most advanced being the Flushing Meadows gold prospect where mineralisation is open at depth and along strike.

Several historical workings are located in the Barwidgee Project.

The Mt McClure Project hosts 5 historical open pit mines where analysis of previous exploration has identified insufficient drilling under and along strike of these pits.

The highest priority areas for drilling and exploration are along strike and at depth below all the open pits and an unmined zone of mineralisation that may be amenable to open pit mining.

The Gordons Project is in the Kalgoorlie terrain of the Norseman to Wiluna Greenstone Belt in Western Australia.

The Company has commenced exploration activities at the Ironstone Well, Barwidgee, Mt McClure and Gordons Projects.

The funds will predominantly be used to fund a 2 year exploration and evaluation program for the Company’s Projects including significant exploration and resource compilation drilling to follow up encouraging historic exploration results.

Panthea Capital Pty Ltd has been appointed Lead Manager of the IPO.

Raisebook is accepting minimum bids of $2,000 and maximum bids of $5,000 per entity registered with Raisebook.

The Company is an early stage exploration company with no JORC Code Resources delineated on its Projects. There can be no assurance that exploration on the Projects will result in the discovery of an economic mineral resource. Even if an apparently viable mineral resource is identified, there is no guarantee that it can be economically exploited.

Note: whilst the Closing Date is 3rd December on the Offer Disclosure Document, this offer is likely to close earlier.

At the close of the Offer, the capital structure of the Company at ASX listing will be:

The Company’s Projects are located in Western Australia as detailed in the map below. 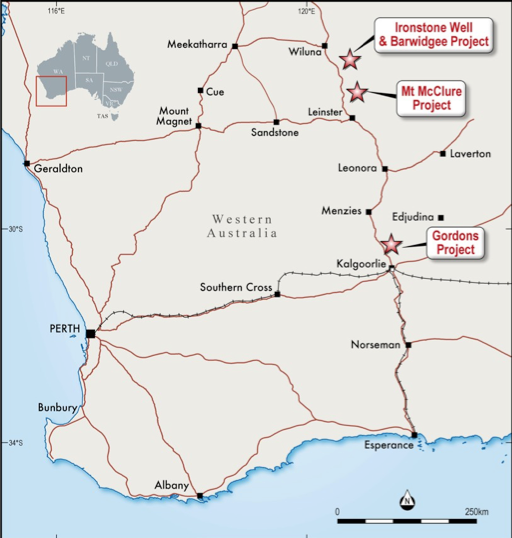 The Ironstone Well project is located approximately 750 km northeast of Perth and 450 km north of the city of Kalgoorlie-Boulder in Western Australia.

The Company’s granted tenements in this Project cover approximately 253km2 of the Yandal Greenstone Belt in the North Eastern Goldfields.

Within the Ironstone Well Project, five drill ready targets have been identified for additional exploration.

The highest priority target is the Flushing Meadows prospect where mineralisation is open at depth and along strike. 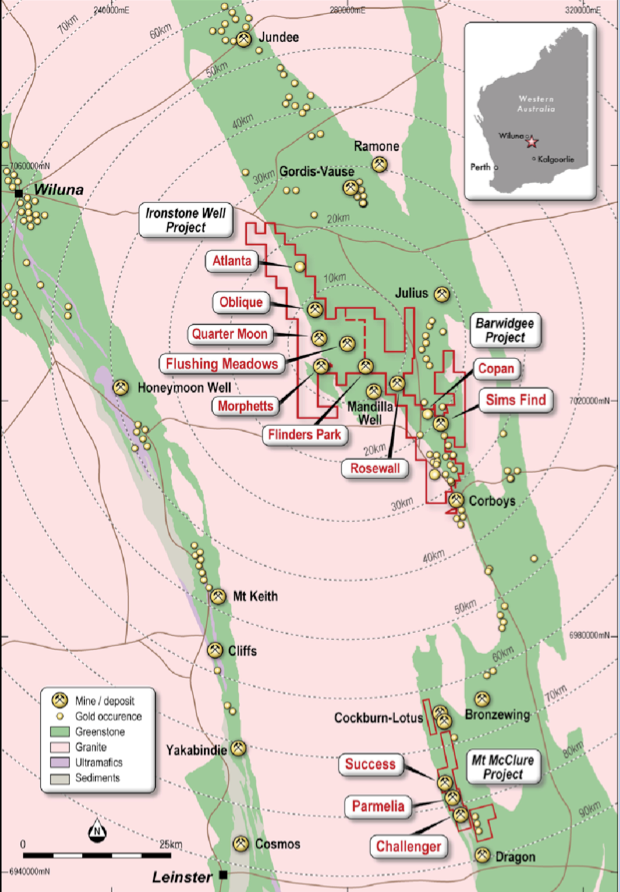 The Barwidgee Project is located immediately to the south-east and contiguous with the Ironstone Well Project with granted tenements covering approximately 219km2 of the Yandal Greenstone Belt.

Within the Barwidgee Project there are several historical workings that have produced gold including the Sims Find and Corboys workings.

There has further been extensive drilling since modern exploration commenced in the 1990’s. However, this drilling in part is of limited effectiveness due to drilling being either too shallow or vertical drilling not being suited to regional geology.

Review of recent and historic exploration and historic small-scale mining activities within the Project area has identified several exploration targets including the Sims Find and Copan prospects as well as exploring for extensions of the Corboys gold deposit line of workings.

The Mt McClure Project is located 40km south of the Barwidgee Project and 50km east of the town of Leinster and contains granted tenements covering approximately 60km2 of the Yandal Greenstone Belt. The western Yandal belt near the Mt McClure area had no pre-1985 history of mining or exploration.

Mt McClure deposits were mined from 1992 by Australian Resources Limited with ore treated through a mill at the Mt McClure mine site.

The Project went through ownership changes and was later held by Newmont Mining Corporation.

Yandal’s budget has been prepared to factor in substantial drilling to intersect interpreted primary structures and lodes at depth predominantly utilising the RC drilling method with some limited diamond drilling where structural data is required.

If sufficient mineralisation is identified, resource estimation and economic evaluation studies will be completed ahead of any initial mining approval activities.

The Gordons Project is located 570km east-northeast of Perth and between 30—60km north of the city of Kalgoorlie-Boulder in Western Australia.

There has been no economic scale modern mining activities within the Gordons Project tenements however there has been extensive periodic exploration drilling programs within a number of prospect areas.

Gordons Project boasts proximity to a sealed all-weather airport serviced by regular mid to large commercial flights at Kalgoorlie, and there is extensive infrastructure, including rail access and industrial support for any exploration or development activities within the Kalgoorlie – Bolder region.

At the Gordons Project there are two key prospect areas within granted tenure at Gordons Dam and Mulgarrie North.

At the Mulgarrie North prospect, historic reconnaissance drilling outlined an 800m long gold anomaly related to a mafic-ultramafic contact. Only a very small part of the anomaly has been drill tested at depth and it remains open along strike. RC drilling will be utilised in the main anomaly and aircore drilling will be used to test for extensions further along strike. 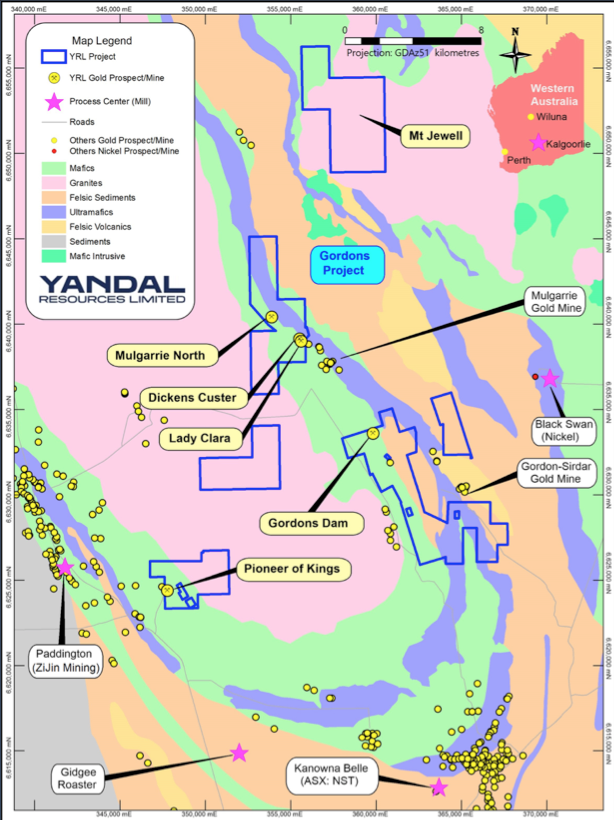 Katina Law has over 27 years’ experience in the mining industry covering corporate and site based roles across several continents. She is currently Chair of Ardea Resources Ltd (ASX: ARL).

Ms Law was Executive Director and CEO of East Africa Resources Ltd from 2012 to 2015, and also held senior positions at Newmont Mining Corporation’s Batu Hijau copper gold project in Indonesia and their head office in Denver, USA, and at LionOre International based in Perth.

From 2008-2013 Mr Hughes was Managing Director of South Boulder Mines Ltd which listed as a gold and nickel exploration company in 2003 and was later demerged into Danakali Limited (ASX: DNK) and Duketon Mining Ltd (ASX: DKM). This was a successful period for South Boulder Mines Ltd which included the discovery of the significant Colluli potash deposit in Eritrea and the high-grade Rosie Ni-Cu-PGE deposit with joint venture partner Independence Group in Western Australia.

Ms Ross has overseen company expansion and wealth creation during her career firstly as a senior accountant for Resolute Ltd (ASX: RSG) from 1987 to 2000 and then again as Company Secretary and Director of Independence Group NL (ASX: IGO) from 2002 to 2014.

Ms Ross was part of the team that floated Independence, joining as CFO and Company Secretary in 2001. Independence was listed on the ASX in 2002 and the same year purchased and recommissioned the Long Nickel Mine. Independence received the Diggers & Dealers Digger of The Year Award in 2011 and then jointly with Anglogold Ashanti in 2014 for the Tropicana Gold Project. Ms Ross is currently a Non-Executive Director of Musgrave Minerals Ltd (ASX: MGV).