IPO of Metals Explorer: EV of $2.3M on Completion of Offer

XS Resources (ASX: XS1) is focused on delivering shareholder value through the identification, development and acquisition of mineral exploration properties across the precious metals, base metals and the industrial metals spectrum.

Subject to the terms and conditions of the SOC1 Option Agreement and the Sugec Option Agreement, the company will acquire two exploration licences over an area of 84km2 located approximately 40 kilometres directly south-east of the regional centre of Armidale in northern New South Wales, referred to as the Halls Peak Project.

High grade zinc, silver, copper and lead mineralisation occur at several prospect areas within Halls Peak. The Gibsons prospect has been the main focus of historic (and recent) drilling, which confirmed the existence of high-grade base metals mineralisation, but it remains largely undefined. The prospect requires further drilling to determine the mineralisation geometry, size and grade distribution.

The core strategy of the company is to advance the projects and undertake further exploratory activities focusing on the Gibsons Prospect at Halls Peak and around an historic mine at Spanish River.

The projects are all of early stage potential – however, with historical mining and exploration activity located within the project areas and in close proximity within the region of both projects, the company considers that each has strong economic potential.

Following completion of the offer, the company intends to move quickly into an exploration program at each of the projects consisting of sampling, mapping, interpretation and drilling.

The board includes directors with experience in the resources industry — especially in cost-effective exploration and project development.

The board will also consider new projects and opportunistic acquisitions in the resources sector which enhance the Company's existing Projects and geographical and/or mineral focus.

GTT Ventures is acting as the lead manager.

The Company issued a Prospectus dated 10 September 2018, and a Supplementary Prospectus, dated 26 September 2018. Both documents form the Disclosure Document for this offer, are important documents that should be read in their entirety.

There is no guarantee that the Shares offered will make a return on the capital invested, that dividends will be paid on the Shares, or that there will be an increase in the value of the Shares in the future.

Note: For additional details in relation to the Capital Structure, please refer to Section 1.7 of the Prospectus.

Note: The above dates are indicative only and may change without notice. The Company reserves the right to extend the Closing Date or close the Offer early without notice.

The company was incorporated on 2 March 2018 as an unlisted public company for the purposes of acquiring the projects the subject of the following agreements:

On completion of the Acquisition Agreements, the company will be the 100% legal and beneficial holder of the projects.

Accordingly, subject to completion of the Acquisition Agreements, the corporate structure will be:

The Halls Peak Project consists of two exploration licences: EL4474 and EL7679. The licences cover an area of 84.12km2 and are located in the New England area of the State of New South Wales.

The location of the licences: 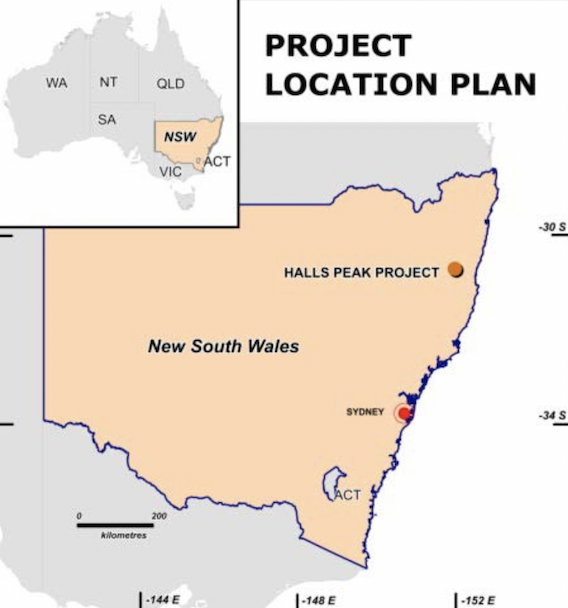 Access to the Halls Peak Project is via the sealed Armidale-Dorrigo Road, then via unsealed roads.

NSW is regarded as having a wide range of mineral rich deposits in a range of tectonic settings, but remains under-explored with a range of opportunities for new discoveries.

The company believes that operating within a well-established mining jurisdiction has the benefit of greatly improving its ability to implement its business model in a cost effective and timely manner.

Additionally, the existence of established mining operations located within NSW will allow the company to source the required geological and technical expertise as and when required along with plant and equipment for planned exploration activities.

During the first 12 months, the company proposes to review and collate available historical information and to conduct mapping and sampling to aid in the geological interpretation and for drill program design.

Planned exploration in the 12 months includes diamond drilling on target zones at Gibsons Open Cut Mine and other at or near surface drill targets.

Work will also commence on gaining a greater understanding on the anomalies identified from the VTEM survey and will include surface geophysical surveys for the eastern plateau and Spike Island prospect.

Follow-up diamond drilling is planned in the second year as a follow-on from encouraging diamond drilling results from the first work program at Gibsons Open Cut together with resource modelling, estimation and reporting. In addition, the company aims to drill-test the VTEM anomalies identified at Sunnyside and Spike Island.

It is anticipated that the exploration program will enable the company to establish an initial resource at Gibsons Open Cut and/or uncover new mineral discoveries. 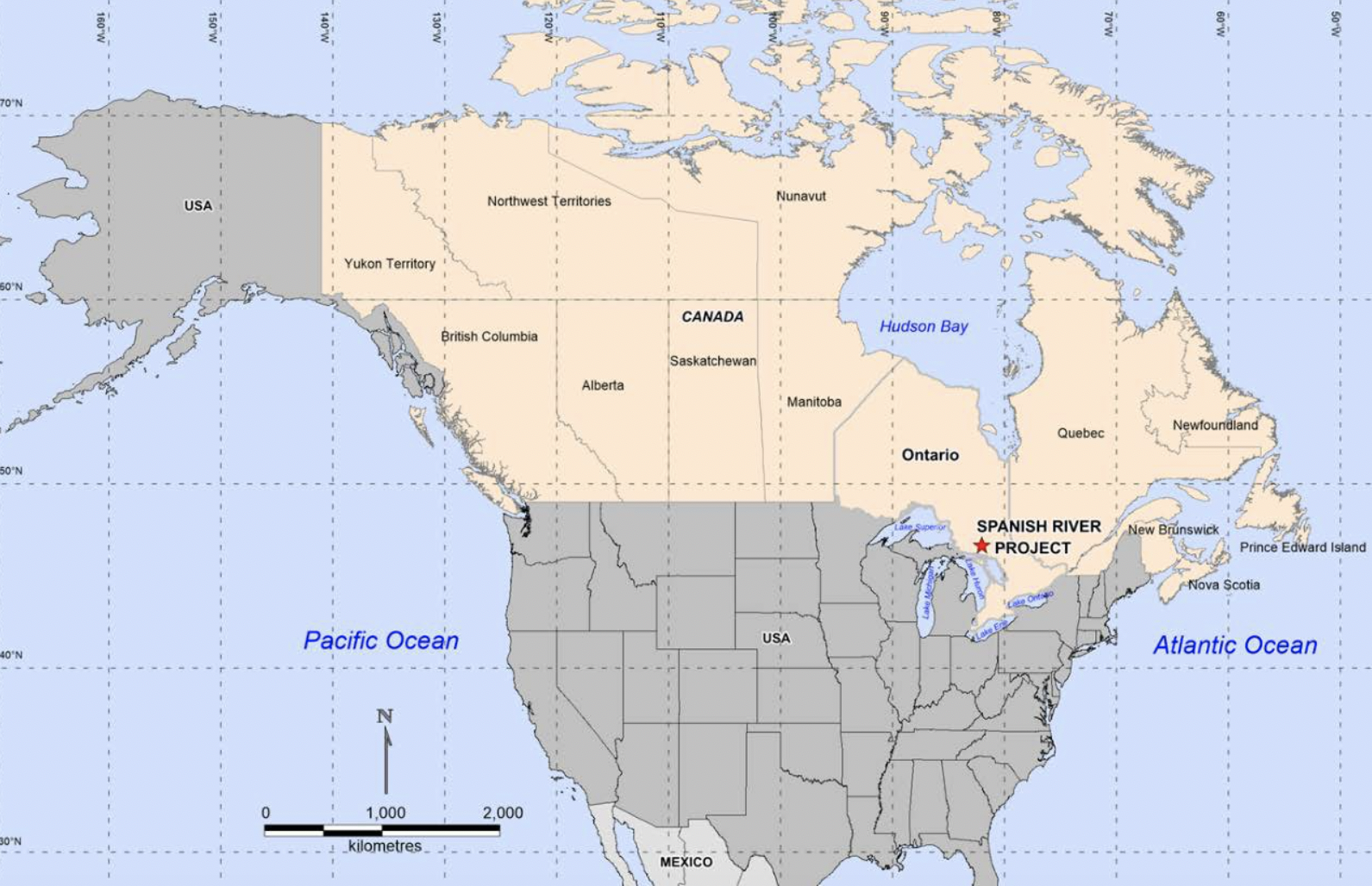 Based on the geological setting, historic exploration and mining, the Spanish River Project has the potential to host a sulphide mineral deposit with copper as the dominant metal. Other subordinate metals including silver, cobalt and uranium may be associated.

Access to the Spanish River Project is via unsealed access roads that may connect to sealed highways linked to Sudbury, or via boat and barge from the nearby southern shore of Lake Agnew which has road access to the regional highway.

Ontario has been recently ranked 7th among mining jurisdictions for its geological attractiveness for minerals and metals and the extent to which government policies encourage or deter exploration and investment.

The Spanish River Project should be considered an early-stage exploration project. Mineral Resources have not been identified according to JORC.

Consequently, mineral exploration is planned on a staged process with the results from each activity used to ensure the following work is conducted effectively and efficiently. Exploration program details may be modified during the stages based on the outcomes of preceding work.

During the first 12 months, the company proposes to review and collate available historical information and to conduct mapping and sampling to aid in the geological interpretation and for drill program design. Planned exploration in the 12 months includes diamond drilling on target zones.

Follow-up diamond drilling is planned in the second year as a follow-on from encouraging diamond drilling results from the first work program together with resource modelling and geostatistical analysis.