Titanium Sands Limited (ASX: TSL) has entered into an option agreement under which it has obtained the sole and exclusive option to acquire 100% of the issued share capital of Srinel Holdings Limited.

Completion of the Proposed Acquisition will see the Company become a heavy mineral sands exploration company in Sri Lanka.

Previous exploration has defined a heavy mineral sand resource in license areas EL180, EL182 and EL 372 on Mannar Island which has an initial JORC Inferred mineral resource of 10.3 Mt with total heavy mineral (THM) of 11.7%.

Following completion of the Proposed Acquisition, the primary objective of the Company will be to explore the Sri Lankan Project and deliver growth of the Company for the benefit of Shareholders, including by undertaking follow up drilling and working on exploration targets in Project areas that have not been effectively tested.

The Company’s initial plans are to increase the definition and scale of the resources at the Sri Lankan Project. This will involve evaluating the major exploration potential and then undertaking a scoping study.

We have been advised by CPS Capital that this offer is expected to close for bids earlier than anticipated due to demand.

The exploration and development of heavy mineral sands is a speculative and high-risk undertaking that may be impeded by circumstances and factors beyond the control of the Company.

There can be no assurance that exploration on the Sri Lankan Project, or any other exploration properties that may be acquired in the future, will result in the discovery of an economic mineral resource. Even if an apparently viable mineral resource is identified, there is no guarantee that it can be economically exploited.

Note: For further details on the Capital Structure, please refer to Section 1.7 of the Disclosure Document.

Note: The above indicative timing is based on information from the Lead Manager as of 4 October 2018. The dates are indicative only and may vary. The Company reserves the right to vary the Closing Date without prior notice, which may impact other dates.

The Sri Lankan Project is located on Mannar island in Sri Lanka.

The project comprises five exploration licences covering up to 166 km2 and is prospective for heavy mineral sands. 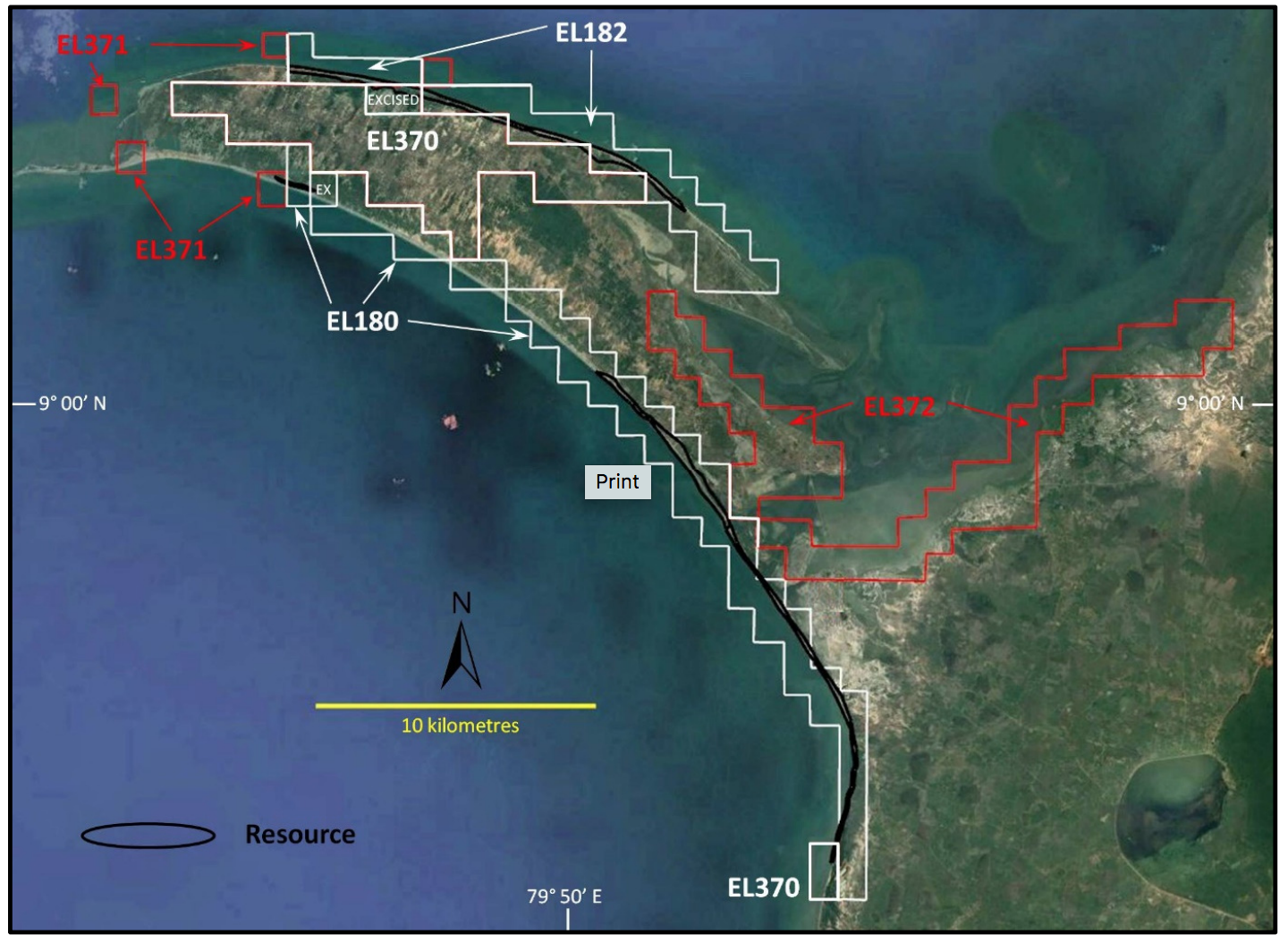 Previous exploration has defined a heavy mineral sand resource in license areas EL180, EL182 and EL 372 on Mannar Island which has an initial JORC Inferred mineral resource of 10.3 Mt with total heavy mineral (THM) of 11.7%.

This resource was based on an historical drill hole data base of 785 auger drill holes and from the 115 holes drilled in 2015.

The drilling and the defined resource envelope were largely confined to within 150m of the Mannar Island shoreline.

Exploration between 2011 and 2015 resulted in the estimation of Inferred Resources within ELs 180/182. The mineral assemblage is high value, the resources having an estimated ilmenite equivalent grade of 13.7%.

As there is a significant probability that the heavy minerals extend below the water table and, as drilling has shown that heavy mineral mineralisation extends inland from the island’s north coast for at least 2.5km, it is likely that the resource tonnage will be able to be significantly upgraded by deeper and more extensive drilling within the granted tenements.

An exploration program of drilling and sampling took place during July and August 2014. The program confirmed the presence of significant amounts of heavy mineral concentrations within the licenses.

The recently announced results from the 2016 and 2017 drilling indicate that significant mineralisation is also present within EL 370 and is likely to extend through EL 372.

TSL has received and released analytical THM% results for 372 of these holes in October 2017 and for a further 477 holes in January 2018.

Their average depth was 1.5m and the maximum hole depth was 6m. The drilled mineralisation appears to have a strike length of around 12km and to extend up to 2.5km inland.

Mineralisation was present from the surface.

The Company intends to focus its initial exploration efforts at Mannar Island to increase the definition and scale of the resources.

This will involve evaluating the major exploration potential of the Sri Lankan Project, both adjacent to the known mineralisation and immediately underlying beneath the water table.

The evaluation will provide the basis for a scoping study which will evaluate development scenarios for the Sri Lankan Project, contemplating the resources, resource mineralogy, mining options, process metallurgy, process plant options, treatment and markets opportunities for the anticipated product stream.

These heavy minerals include the valuable heavy minerals ilmenite, rutile, zircon, monazite, and garnet. Erosion of the basement rocks, down-river transport to the coast, and longshore movement by currents and waves has led to the accumulation of heavy mineral deposits in the coastal sands.

The Pullmoddai Deposit has been mined by Lanka Mineral Sands Limited since 1959; Iluka Resources Limited (ASX: ILU) has completed a scoping study on its Puttalam Deposits, which contain 689Mt at an average grade of 8.2% Heavy Minerals; and Capital Metals Limited is developing its Oluvil Deposit, which contains 17.2Mt @ 17.6% Total Heavy minerals. 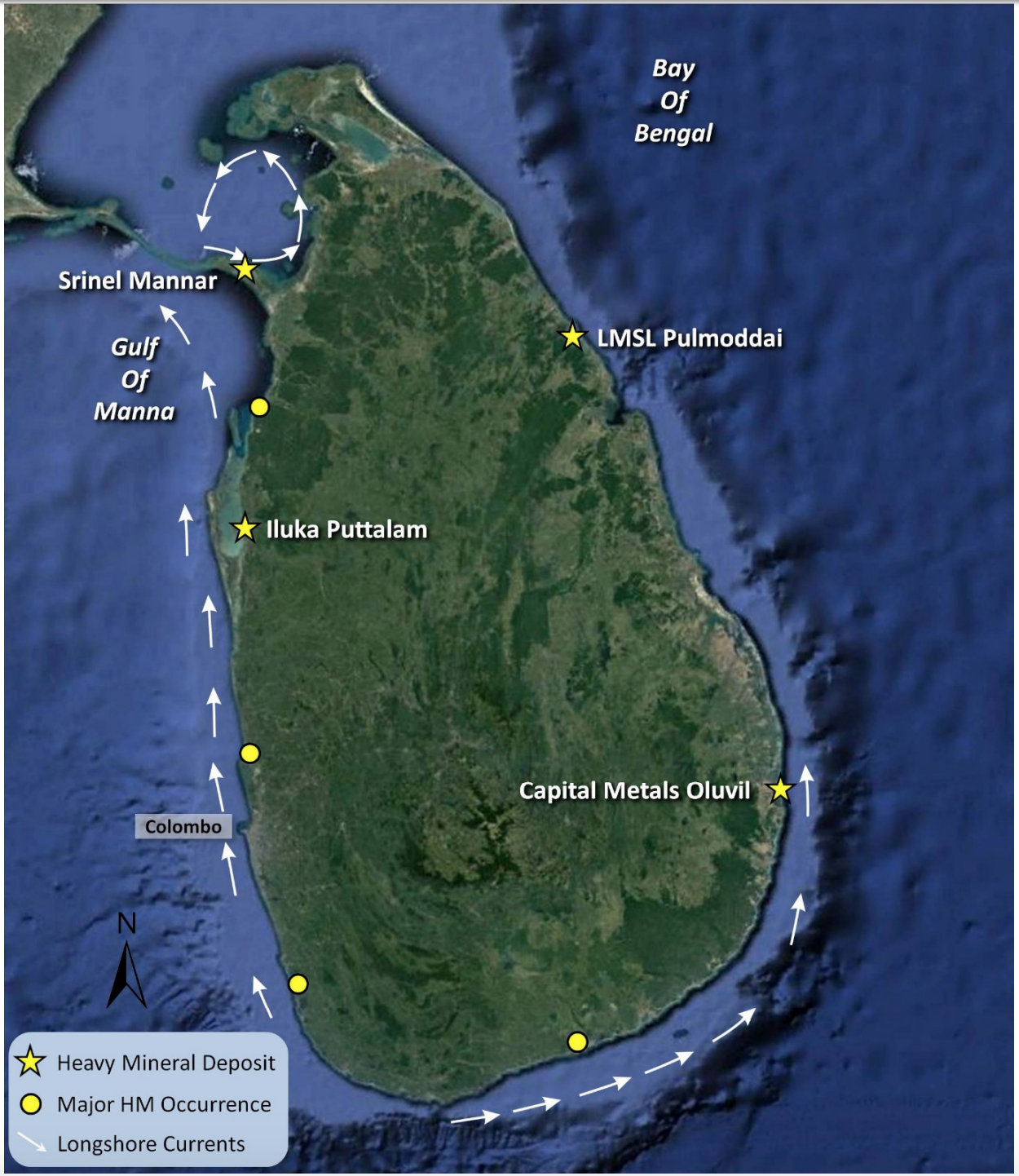