All three documents are the 'Disclosure Documents' for this offer and must be read together. The documents are available by clicking the ACCESS DISCLOSURE DOCUMENTS button on this page.

Following over 15 years of successful product development, the Company is entering a new growth period to expand the distribution of its existing products and develop new products to address issues with the shark mitigation industry.

Shark Shield is a world leader in shark deterrent technology with a fifteen-year history of successful product development.

The Company has a diverse range of products addressing the needs of multiple market segments with a history of sales revenues.

The Company’s consolidated unaudited revenue for the third quarter of this financial year ($465K) has increased by 78% compared to the corresponding quarter in FY17 ($261K).

The Shark Shield FREEDOM7 and FREEDOM+ Surf are the only products approved by the Western Australian Government to date for its Shark Hazard Mitigation program.

The Shark Shield brand is often used to describe the category of shark deterrents, it is a defining brand similar to Rollerblade, Xerox, or Kleenex.

Note: * Undiluted and based on Offer Price, before exercise of any Options or conversion of Performance Shares

The offer of the securities are made in, or accompanied by, a copy of the disclosure documents which can be obtained by clicking on the "ACCESS DISCLOSURE DOCUMENTS" button on this page.

Anyone who wants to acquire the securities will need to complete an electronic application form which will be sent via email after downloading the Disclosure Documents.

There are risks associated with any investment. You should consider the risk factors that could affect the performance of the Company as contained in the Disclosure Documents.

The Company’s main objectives on the completion of the Offer are to:

Shark Shield products are used by a variety of ocean goers such as surfers, divers, for ocean kayaking and fishing to deter sharks through the use of electrical fields.

The products are the result of over twenty years of scientific research by leading experts in sharks and are used by surfers, scuba divers, spear fishers, free-divers and ocean kayak fishers.

The FREEDOM7 can be used for a wide range of marine sports including freediving, scuba diving, kayaking and ocean fishing.

An electrical field is created via a trailing antenna cord attached to a power module worn on the ankle. 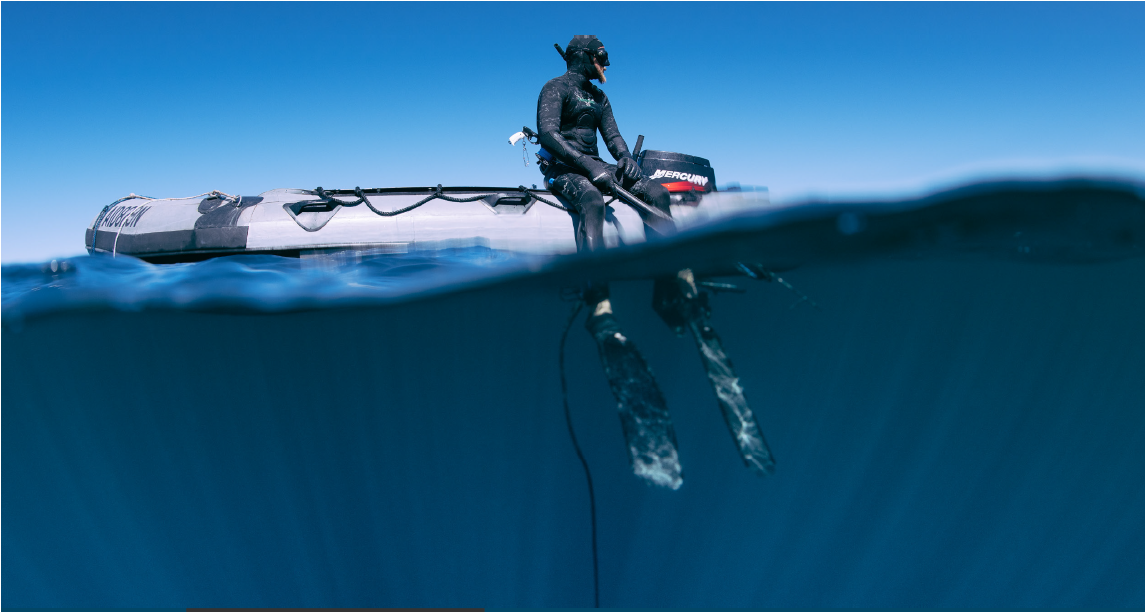 Its lightweight design makes it comfortable to wear and the long-life battery provides the confidence in the water for up to six hours at a time, with a LED battery life indicator.

The SCUBA7 is used by professional and sports divers alike.

Designed for those scuba divers concerned about the trailing cord antenna of the FREEDOM7, the SCUBA7 offers a more compact solution with a tank mounted electrode combined with a short low drag ankle antenna, providing freedom of movement.

An electrical field is created via a tank-mounted electrode, short antenna worn on the ankle, and a power module strapped to the thigh.

The SCUBA7 offers protection for scuba divers with a depth rating of up to 50 metres below the ocean surface.

The FREEDOM+ Surf is created for surfers and was developed with World Champion surfer Tom Carroll as a consultant to the industrial design team to minimise the impact on surfboard performance.

Tom Carroll was voted in at Number 7 on Surfer Magazine’s list of the “Greatest Surfers of All Time”. He was inducted into the Sport Australia Hall of Fame in 1992.

Tom has worked closely with the Company in the development of the Company’s FREEDOM+ Surf product along with the promotion of the Technology.

It uses a small design modification to the grip pad systems used on most surfboards.

The grip pad, designed in partnership with Ocean & Earth, becomes the housing for the transferable electronics and electrical connector to the flat adhesive decal containing the electrodes taped to the bottom of the surfboard.

Of the fifteen fatalities in Western Australia over the past fifteen years, thirteen were either surfers or divers.

The recommendation and funding of proven personal shark deterrents is a world first.

At the date of the Supplementary Prospectus, Shark Shield FREEDOM7 and FREEDOM+ Surf are the only products approved for the rebate.

FREEDOM+ Surf was recently accepted based on the independent research outlined in the Supplementary Prospectus demonstrating product efficacy.

The Rebate Program initially funded 1,000 units with a $200 rebate to consumers and doubled the program in November 2017 with a further 1,000 units, and a commitment for an additional 1,000 units on the announcement of the FREEDOM+ Surf inclusion.

The Company is confident that government endorsements of the Shark Shield Technology will increase brand awareness, education and adoption rates across multiple segments both locally and globally.

Other governments may adopt similar programs given the success of the Western Australian program.

Sharks and rays (chondrichthyans) have small gel filled sacs known as the ampullae of Lorenzini located in their snouts. They use these short-range sensors when searching for food at close range, typically less than 50 centimetres.

The Shark Shield Technology creates a three-dimensional electrical field that causes an unpleasant sensation impacting the shark’s ampullae of Lorenzini.

When the shark comes into proximity of the electrical waveform, it experiences non-damaging but uncontrollable spasms in the electrical receptors causing it to turn away.

Both electrodes must be immersed in sea water to create the electrical field.

Considerable funds (>$10M) have been invested over twenty years on the development and testing of the Shark Shield Technology and products by both the Company and independent organisations.

At the date of the Prospectus, the Shark Shield FREEDOM7 is the only electrical shark deterrent scientifically proven and independently tested to significantly reduce the risk of a shark attack.

A recent study funded through a grant by the NSW Department of Planning and Primary Industry (DPI) and partially by the Company, and led by Associate Professor Charlie Huveneers of Flinders University has tested the efficacy of Shark Shield Technology and other products on white sharks.

The effectiveness of the deterrents was variable, with the Freedom+ Surf affecting shark behaviour the most (increased number of reactions) and reducing the percentage of bait taken from 96% (relative to the control board) to 40%.

External independent scientific testing data provides consumers with the highest level of confidene when assessing the credibility and reliability of a product.

Further details of scientific research are available in Section 3.0 of the Supplementary Prospectus, and Section 4.3 of the Prospectus.

Products on the Horizon

The Company has a well-defined product development roadmap, which includes additional lower priced personal deterrents and longer-range Technology based on current and new technologies for the boat and beach segments.

These products include a portable handheld device code named “The Force” and a boat protection device the LR10.

The Company believes that the successful development of longer-range shark deterrent technology will fundamentally change the way shark hazards are managed at beaches, fish farming / aquaculture, boating and fishing.

Longer range products are expected to deliver higher average selling prices with ongoing annuity revenue streams based on the requirement to maintain lifesaving safety equipment, such as certifications services offered on fire extinguishers and life rafts.

The product launch date has been set for the first week of November 2018.

The boat LR10 has a target recommended retail price (RRP) range of approximately $2,500 with a target gross margin of approximately 70% and two additional product variants for fishing and beach protection at a similar price point.

The new LR10 design allows for a target of approximately 10% of RRP as an annual service maintenance charge for maintaining safety equipment, in the same revenue model associated with annually certifying fire extinguishers and life rafts.

The LR10 final concept is shown below*:

The Company is developing a product named “The Force”. This product concept has now been completed and production of the Proof of Concept (POC) has commenced with delivery expected in early June.

Subject to the Company successfully completing listing on ASX, this new hand-held volume consumer product is intended to be launched alongside the boat product in the first week of November 2018.

The target market for this new consumer handheld product is primarily spearfishermen who need to defend themselves from sharks attracted by speared fish.

The Force (HH01) final concept is shown below*: 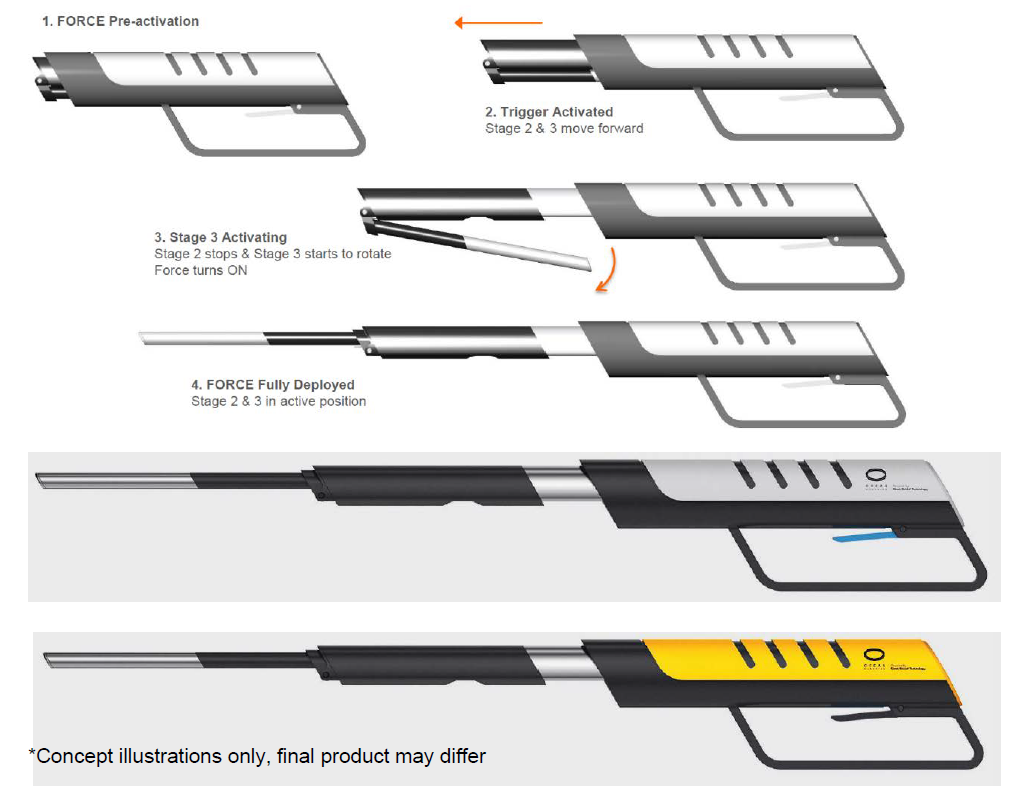 New products based on the current Technology launching into the boat and beach segments, and further down the path market development via new long-range innovative Technologies for boat and beach protection.

The long-range new Technology is also expected to open the potential of additional markets such as aquaculture, fish farming and protection of private jetties of homes on canals.

The Company seeks to maintain and grow its competitive advantage through the development of its brand and product category ownership, intellectual property, segment knowledge, intimate customer relationships, installed customer base, supported by a history of independently published research.

Over the medium to longer-term the Company’s product growth strategies will expand the revenue base to consist of hardware sales and services revenues, including equipment leasing for beaches.

The opportunity presented with the boat and beach products is to build a services annuity revenue stream through annual safety maintenance services such as provided on other safety equipment such as fire extinguishers.