Moho Resources NL (to be renamed, Moho Resources Limited) was incorporated for the primary purpose of acquiring, exploring and developing gold, nickel and copper mineral projects in Australia.

The Company is exploring three prospective projects in Queensland and Western Australia in proximity to historical and current gold and nickel mines.

The Company’s objective is to create wealth for its Shareholders through commercial exploration success.

In Queensland the Company believes there is potential for the discovery of large gold mineralised systems under shallow cover.

The Company believes the Projects have substantial potential for the discovery of commercially viable gold and nickel mineralisation.

Following listing, the Company proposes to explore mainly for deposits of nickel, copper, cobalt and gold in prospective and under-explored geological terranes in Australia.

Moho's Non-Executive Chairman Terence Streeter was a Director of West Australian nickel explorer and miner Jubilee Mines NL from 1993 to May 2004 and was a founding shareholder of Western Areas NL (ASX: WSA) in 1999, which went on to discover and develop two high-grade nickel sulphide mines in the Forrestania region of Western Australia, producing 22,000 – 25,000t nickel pa.

The Company has appointed RM Corporate Finance Pty Ltd as lead manager to the Offer.

We expect this offer to be in high demand.

The offer of the securities are made in the Disclosure Document, a copy of this document can be obtained by clicking on the "ACCESS DISCLOSURE DOCUMENT" button on this page.

There are risks associated with an investment in the Company. The Shares offered under this Prospectus carry no guarantee with respect to return on capital investment, payment of dividends or the future value of the Shares.

Note: The above dates are indicative only and may change without notice. The company reserves the right to extend the Closing Date or close the offer early without prior notice.

Moho’s Directors are of the view that an investment in the Company provides the following non- exhaustive list of advantages:

The company’s projects comprise a total of 956 km2 of tenure, of which 867 km2 is granted and 89 km2 is under application. The tenements are prospective for gold, base metals and tin mineralisation.

Over the next two years the Company’s strategy is to systematically explore the Empress Springs Project in Queensland and Silver Swan North and Burracoppin Projects in Western Australia and in doing so, satisfy the relevant earn-in requirements with respect to the farm-in joint venture agreements pertaining to those Projects.

Depending on results achieved, Moho will focus its efforts on progressing the projects which the Directors believe have the best chance of delivering economic success and growth for the Company.

The Company will also consider acquiring other attractive mineral exploration or resource opportunities in Australia which meet these objectives. 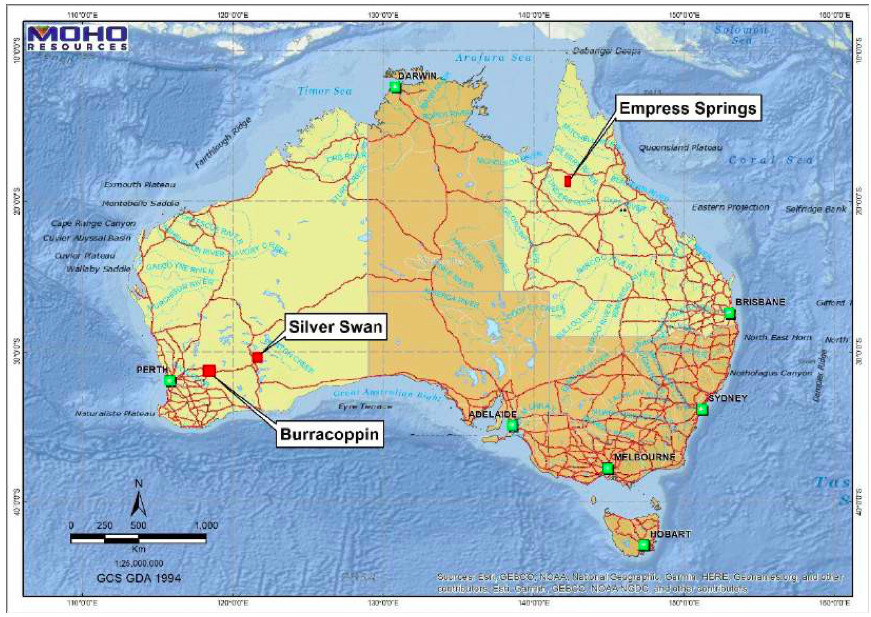 Empress Springs — Gold and Base Metals

The Company considers that the Empress Springs Project has the largest mineral resource potential of the three Projects with indications of having the geological characteristics required to host world-class scale gold mineralised systems.

The Company is earning up to a 70% interest in three mineral exploration permits (EPM25208, EPM25209 and EPM25210) totalling approximately 773 km² of tenure, about 25km from the Croydon goldfield, Queensland.

The Company is exploring for large mineralised gold systems in a location where the target geology has not been tested by drilling.

The only previous drilling in the tenement areas was in 1972–1973 for uranium exploration by Esso Australia Ltd. Gold was not assayed for in these drillholes and no residual drill samples exist.

At one stage Croydon was the largest goldfield in north Queensland.

Moho considers the Empress Springs Project has the potential to host substantially larger gold deposits than at the exposed Croydon Goldfield.

This is due to the structural location, apparently larger plumbing system and deeper mantle penetrating structures transporting fluids from depth.

Moho is planning at least 10,000 m of air-core, 5,000 m of reverse circulation and 1,000 m of diamond drilling at Empress Springs at a cost of $1 million in the first two years from listing on the ASX.

The Silver Swan North Project is located about 50 km northeast of the regional mining centre of Kalgoorlie in Western Australia. The Project covers approximately 55 km² and comprises four granted tenements and two tenement applications within the Kalgoorlie Terrane.

Greenstone belts of the Kalgoorlie Terrane are host to many world-class nickel and gold deposits.

Moho believes that the Silver Swan North Project area is under-explored and prospective for the discovery of both nickel and gold mineralisation. Moho will focus on identifying komatiite-hosted nickel sulphide deposits, as well as shear hosted and porphyry related gold mineralisation.

The Silver Swan deposit is one the highest-grade nickel deposits in the world.

The Silver Swan North Project lies within 5 km of the historical Gordon Sirdar and Mulgarrie mines. The Kanowna Belle deposit is located about 20 km south of the Project area and is hosted in felsic rocks of the Gindalbie Group. From 1994 to 2015 the mine produced an estimated 4 Moz of gold.

Favourable geology and a substantial mineral endowment of the area supports Moho’s belief that further exploration of the Silver Swan North Project using a mineral systems approach of building on the existing geological knowledge could result in a significant mineral discovery.

The Company plans to drill approximately 2,000 m of RC drilling at the East Samson Dam gold prospect to close off gold mineralisation which remains open along strike to the north.

Moho believes that if mineralisation is extended and a suitable gold resource established, it could provide early cash flow for the Company.

Moho is targeting a large, undrilled area within E27/528 and PLA27/2390 in the central north of the Project. Given the proximity to the Silver Swan and Black Swan deposits, Moho considers this area may be underlain in places by ultramafic rocks and consequently prospective for nickel mineralisation.

The Company is earning up to a 70% interest in E70/4888 and has applied for E70/5154 in an underexplored greenstone terrain in Southwest Terrane of the Western Australian wheatbelt.

The Southwest Terrane is the southwestern- most tectono-stratigraphic element of the Archaean aged Yilgarn Craton in Western Australia.

Moho is following up gravity anomalies and associated gold geochemical anomalies. This approach has proven successful elsewhere in that Terrane.

The Project area is located on the margin of a moderate amplitude continental-scale gravity anomaly; near a regional north-south trending structure, which is close to the Tampia gold deposit and which runs through Moho’s tenements; at the intersection of two major mineralised corridors (Westonia and Tampia Hill trends); and within an under-explored greenstone belt.

Burracoppin is located within 10 km of the Westonia (or Edna May) gold mine, which is owned and operated by Ramelius Resources (ASX: RMS). Recorded gold production from the mine is more than 1 Moz.

Moho’s use of magnetic and gravity data combined with surface geochemistry has defined 10 prospective targets including 9 located on gravity highs for detailed geochemical follow-up and drill testing.

The proceeds from the offer and the Company’s existing cash reserves will be used for: