WA Exploration Projects with a Major Focus on Gold and Lithium

Golden State Mining (GSM or the Company) is a Perth-based mineral exploration company established with the purpose of exploring for gold and lithium mineralisation on a prospective package of mineral tenements in Western Australia.

The Company’s current projects are located at Cue, a premier gold mining district in the Murchison region; Yule in the Pilbara; and Four Mile Well near Laverton in the Eastern Goldfields.

The Company secured these projects due to their prospective geological settings within proven mineralised areas, and their lack of previous systematic and dedicated modern exploration despite their significant potential.

The purpose of the Offer is to provide funds for the Company to undertake targeted exploration over the tenement portfolio along with general working capital.

The Company’s initial focus will be on the exploration of recognised priority gold targets identified within the Cue tenement area with prepared drill programs designed to target new discoveries of gold mineralisation.

In conjunction, the Company will continue to evaluate its tenement portfolio at Yule and Four Mile Well to identify or upgrade priority targets for exploration.

Further activities will focus on the evaluation of early cash flow opportunities at Cue. This potential was a significant factor in the Company’s decision to pursue the Cue project. The Company intends to undertake definition and extension drilling with the view to establishing a robust mineral resource base of sufficient scale to allow for the development of a mining operation.

GSM has assembled a well-qualified and balanced board and senior management team with proven corporate, technical, financial and commercial expertise ideally suited to maximising the value of the Company’s projects and to capitalise on exploration success.

The Company has also strived to minimise the number of Shares on issue upon listing to enable shareholders to retain maximum exposure should the Company be successful in its endeavours.

Hartleys will be the Lead Manager to the Offer, which is being co-managed by DJ Carmichael.

Raisebook anticipates high demand for this offer and expects to close the offer by 12pm Friday 7th September.

KEY STATISTICS OF THE OFFER

Note: Refer to Section 1.2 of the Disclosure Document for additional details on the Capital Structure, including exercise details of the Options.

Note: The above dates are indicative only and may change without notice. The Company reserves the right to extend the closing dates of the Offers, accept late applications or open or close the Offers early without notice. 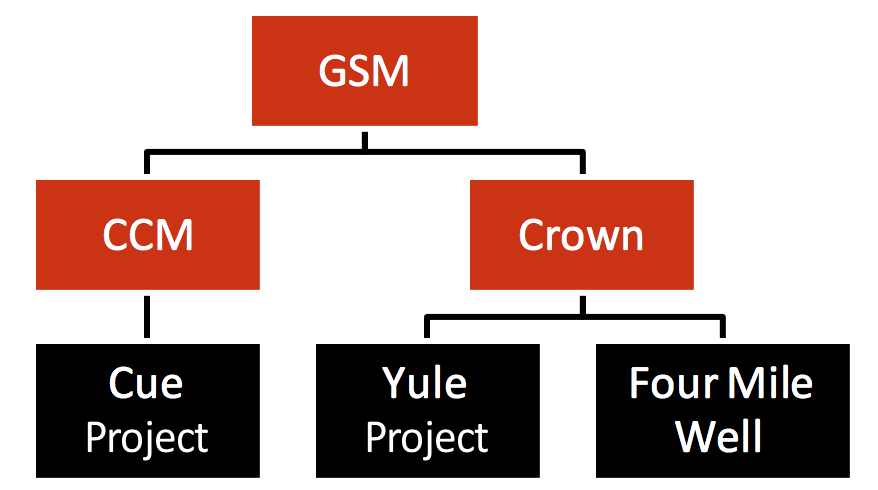 The Company was incorporated in Western Australia on 15 August 2017 and has two wholly owned subsidiaries:

The Company, via CCM and Crown Mining, has acquired rights to three Western Australian gold projects:

The Company’s current projects are located at Cue, a premier gold mining district in the Murchison region; Yule in the Pilbara; and Four Mile Well near Laverton in the Eastern Goldfields. 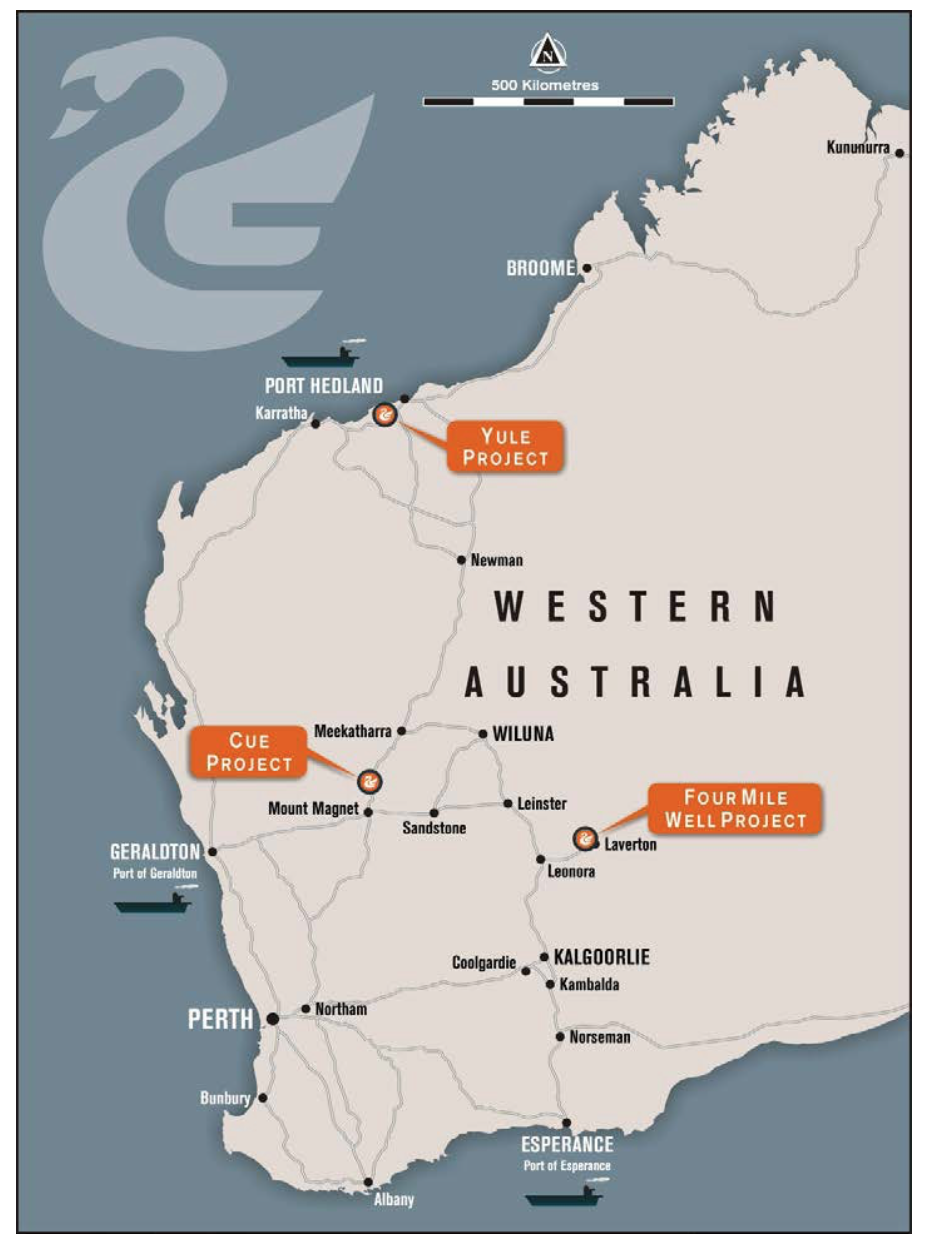 The cornerstone Cue Project is located adjacent to the historical town of Cue in the Murchison district, approximately 659km by road northeast of Perth.

The Cue Project is located in a region that has produced over seven million ounces of gold over the past 126 years and covers an area of approximately 46km2. 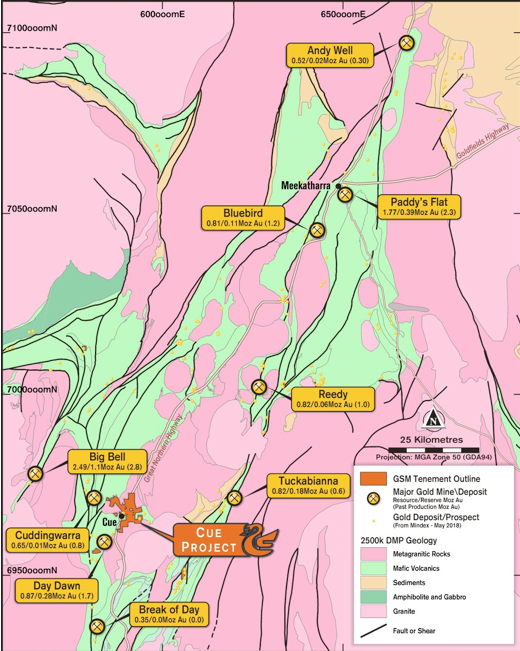 Several historical mine workings with limited previous drilling are considered high priority exploration targets that require systematic drilling and evaluation work along strike and down-dip and plunge of known mineralisation.

Some of the larger workings include the Cue No.1, Salisbury, Light of Asia and Queen of the May mines which have been explored to some extent, however previous explorers appeared to be focussed on defining shallow high-grade ore shoots immediately below historic gold workings. 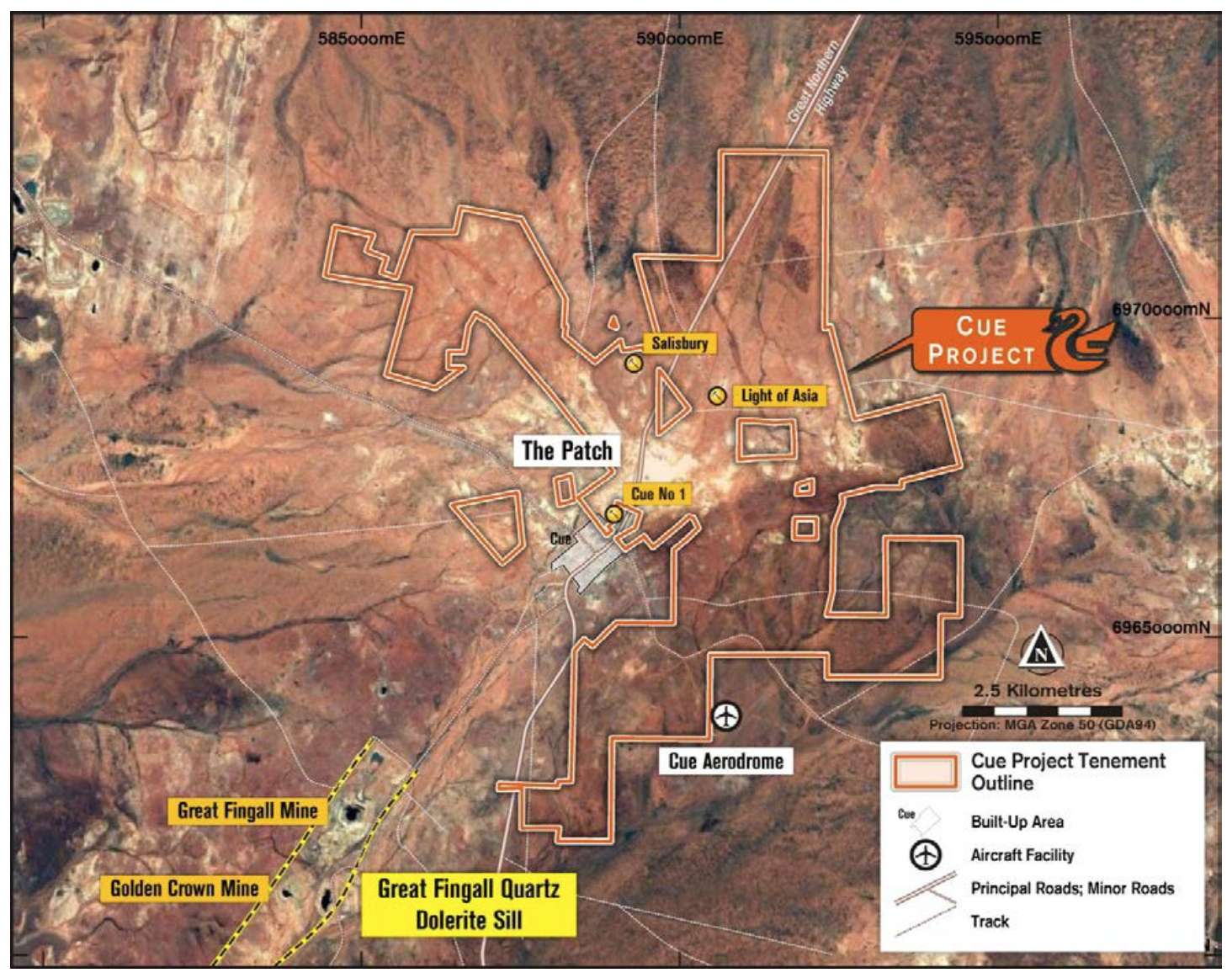 Another significant exploration target is the relatively unique geology at “The Patch” when compared to the remainder of gold deposits in the Cue Project.

“The Patch” extends approximately 1km along strike (N – S) and 0.8km east to west and is an area of highly kaolinised granitoid which overlies the projected extension of both the Great Fingall Shear Zone (GFSZ) and the Great Fingall Dolerite.

This target contains a series of stacked, shallow dipping quartz reefs and moderate to steeply dipping quartz ladder veins. These veins vary in width from a few centimetres up to 3 to 4 meters in width.

The structural geometry of the vein system in this area is not currently understood, however the dominance of the interpreted shallow dipping vein sets suggests these veins formed in a compressive structural environment.

The Yule Project is located between 35km and 65km southwest of Port Hedland in the Northern Pilbara region of Western Australia. 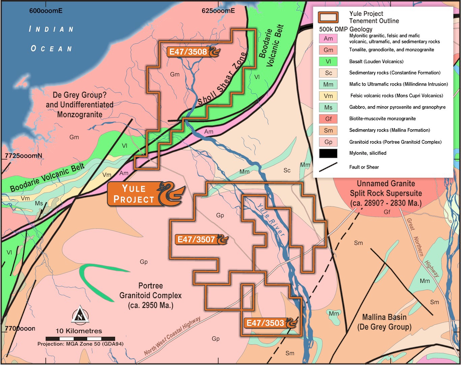 There is the potential for tin, tantalum and lithium mineralisation to be located within Yule South tenements covering the Portree Granite Complex as these metals occur in similar age granitoid rocks to the east and southeast of the project areas.

The Four Mile Well Project is located 9km to the north of the Laverton townsite in the Eastern Goldfields.

The region is highly mineralised with a number of major gold and nickel deposits within close proximity to the Four Mile Well Project area.

Two significant nickel sulphide deposits (Windarra and Mt Windarra) are located to the west of the project area and the 1.3Moz Lancefield gold deposit is located less than 1km to the south.