Both of these documents should be read in their entirety before making an investment decision. The documents are available by clicking the 'ACCESS DISCLOSURE DOCUMENTS' button on this page.

The Supplementary Prospectus has been prepared to advise investors that:

GeoCrystal’s flagship Webb diamond project is located in the Gibson Desert of WA, which was discovered in 2013 and is one of the largest kimberlite fields to be discovered in Australia since the discoveries of the Ellendale, Argyle and Merlin clusters more than 20 years ago.

To date, the company has spent over $4M in exploration and has earned an 81.5% interest in five of the six granted exploration licences that comprise the project.

Its drilling programs in the past have successfully identified 51 kimberlite bodies at Webb and there remain 216 untested targets within this very large field.

Some of these targets lie within an area characterised by microdiamonds lying at the surface in desert sands.

Following the listing of the company, a substantial drilling program will be prioritised with the goal of finding the source of these diamonds.

The Company has been fortunate to have on its Board as Technical Director Tom Reddicliffe, who will oversee and manage the exploration programs planned by the Company.

Tom is credited with discovering the Merlin diamond pipes in the Northern Territory in 1993 when he was Australian Exploration Manager of Ashton Mining Limited.

The Public Offer is partially underwritten by Time Strong Limited to a maximum of $2,500,000.

The Public Offer is conditional on the Company raising at least $5,000,000.

The key purpose of the offer is to provide additional funds to advance exploration on the company's projects to commence following successful listing on the ASX.

Potential investors should understand that diamond exploration and development is a high risk undertaking. The Company’s projects are at different stages of development and there can be no assurances that exploration of acquired projects or any other exploration properties that may be acquired in the future will result in the discovery of an economic resource.

On the basis that the Company completes the Offers on the terms in this Prospectus and assuming no further Securities are issued or Options exercised, on Admission the Company’s capital structure will be as follows:

Note: Please refer to Sections 1.9 and 2.2 of the Disclosure Document for further details relating to the Company's current capital structure.

The company’s work has led it to a portfolio of three projects, each with excellent potential to host major, world-class diamond discoveries.

The projects are located in Western Australia and the Northern Territory, as shown below: 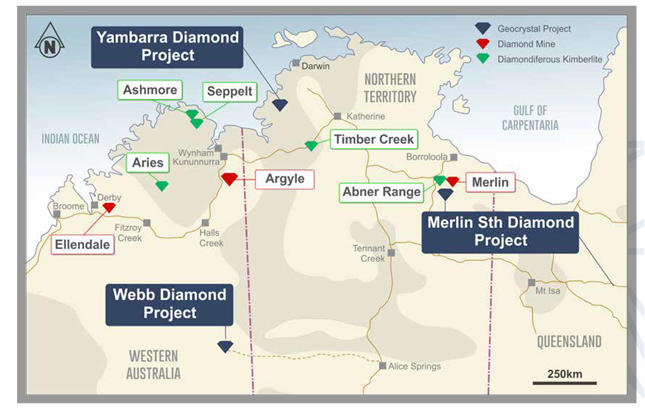 GeoCrystal’s flagship Webb Project, covering 667 km2 in area, is located in the remote West Arunta region of the Gibson Desert of Western Australia, approximately 500km due south of Halls Creek and 630km west of Alice Springs.

The project is the first new kimberlite field discovery to be made in Australia in the past 20 years.

The company made the initial discovery of the Webb kimberlite field in 2013 and since then has spent over $4m in exploration expenditure.

The project comprises seven tenements (six granted and one under application). GeoCrystal holds an 81.5% interest in six of those tenements, together with a 77.5% interest in the remaining tenement via two separate joint venture agreements.

The company undertook exploration and drilling programs on the Webb tenements in 2012 and 2013 and discovered 51 kimberlite bodies. There remain 216 untested kimberlite targets at Webb. 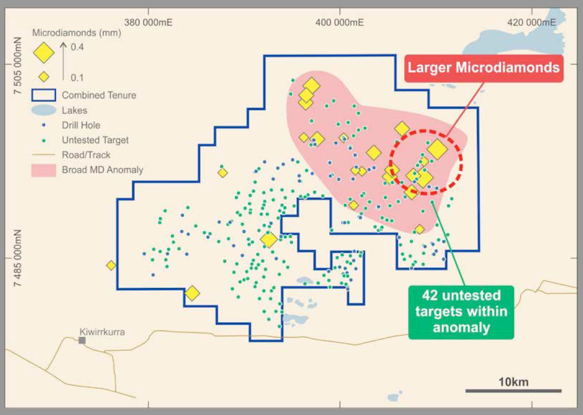 The discovery of a potential new diamond field, some 400km2 in extent, forms the basis for the ongoing exploration activities.

This clustering of kimberlite intrusive bodies is a recognised characteristic feature of most of the major diamond fields around the world, including the Ellendale Diamond Field, also located in WA.

The proposed exploration program for the Webb Project will include a review of the airborne magnetics, implementation of ground magnetic surveys over priority airborne magnetic targets, followed by a drilling program of remaining selected targets and drill bulk-sampling with large diameter core when warranted.

The company has also negotiated the purchase of an 80% interest in the Merlin South diamond project located in the Northern Territory of Australia.

This project area has surface diamonds and kimberlitic indicator minerals that provide good initial leads to locate the kimberlite source through a targeted exploration programme.

The project is within the Merlin Kimberlite Province footprint, which is defined by the high incidence of dispersed microdiamonds and commercially sized diamonds.

The project is modelled on the Merlin diamond field 40km to the north which became a renowned producer of large, good quality white diamonds and produced a 104.73 carat diamond, Australia's largest. 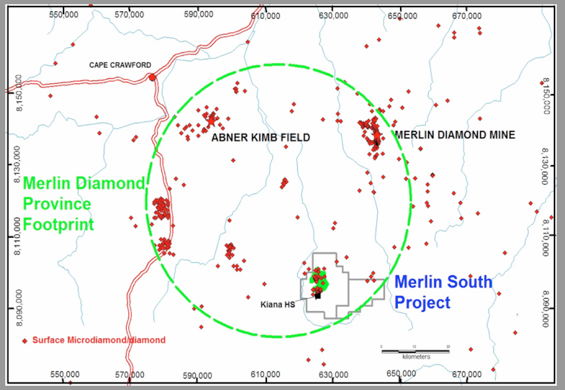 After listing on ASX, the Company will carry out an exploration program including ground based EM geophysical surveys within the area of the indicator mineral dispersion footprint followed by drill testing of selected targets

The company also has a 100% interest in the Yambarra diamond project in the Daly River region of the Northern Territory.

Yambarra contains several magnetic anomalies, one of which is a promising kimberlite target within the same regional structure as the Argyle diamond mine. This will be the focus of a targeted drilling program once the tenement is granted.

Following the grant of the application tenement, the company will carry out an exploration program, including re-interpretation of existing geophysical datasets and the implementation of stream sediment sampling programs prior to drill testing of potential kimberlite targets.

The company has on its Board as Technical Director, Tom Reddicliffe, who will oversee and manage the exploration programs planned by the company.

Reddcliffe is credited with discovering the Merlin diamond pipes in the Northern Territory in 1993 when he was Australian Exploration Manager of Ashton Mining Limited.

Together with Tom, the company has assembled an exceptional Board and management team who have extensive exploration and mining experience with an excellent track record of discovery and success.

The combined skills of GeoCrystal's team will provide a significant platform to fast track the exploration and development of the company's projects as it moves to create significant shareholder value.

Proposed Use of Funds

The company proposes to use the funds raised to undertake exploration on the tenements, fund the acquisition of Merlin South Project, pay expenses, and towards general administration fees and working capital.

Note: See Section 1.8 of the Disclosure Document for further details on the proposed use of funds.

Note: The dates shown above are indicative only and may vary subject to the Corporations Act, the Listing Rules, and other applicable laws.