ASX shell company Public Holdings (Australia) Ltd, soon to be renamed First Au Limited, has entered into acquisition agreements for a highly prospective, advanced exploration portfolio of gold and base metals projects in the Kalgoorlie Goldfields and Pilbara regions of WA.

The Company is in the process of obtaining shareholder approval for a change of activities and will subsequently re-list on the ASX raising up to $7.5 million through the allotment of 187.5 million new shares with one-for-one free attaching quoted options at a subscription price of 4 cents per share.

The Company voluntarily suspended its shares from quotation on the ASX on 6 June 2016. Over this period the Board has sought to identify and secure a transaction that has the potential to generate substantial value and returns for existing shareholders and new investors.

After an exhaustive process the Company entered into acquisition agreements with entities controlled by well-known and highly respected mining prospector Denis O’Meara.

The projects are close to operating mines, historic mining towns and past gold, copper and base metals discoveries and have received in excess of $8 million in combined exploration expenditure to date by Denis O'Meara Prospecting and others.

The significant past exploration expenditure has generated encouraging drilling intersections and immediate targets for further exploration.

Mr O’Meara has had a lifelong involvement in the mining industry and will remain an integral part of the Company’s proposed exploration efforts.

Mr O’Meara was the joint founder of Atlas Iron (ASX: AGO), De Grey Mining (ASX: DEG) and Shaw River Resources with involvement in numerous other ASX listings. He is a joint recipient with Geoff Blackburn of the AMEC ''Prospector of the Year Award''.

The Company’s flagship projects will include:

The Pilbara region of Western Australia has come into prominence predominantly triggered by the new discovery of a significant quantity of gold nuggets in the East Pilbara.

Large nuggets have been found shedding from, and contained within, Hardy Formation conglomerates.

Public Holdings (Australia) Ltd (ACN 000 332 918), to be renamed First Au Limited, is offering up to 187.5 million Shares at an issue price of $0.04 each, together with one attaching Quoted Option for every Share subscribed, to raise $7.5M (before associated costs) - this is the Public Offer.

Raisebook has secured an allocation of this offer for Raisebook subscribers.

The Shares to be issued, and the Shares issued upon exercise of the Quoted Options pursuant to the Public Offer, are of the same class and will rank equally with the existing Shares on issue.

Potential investors should understand that mineral exploration and development are high-risk undertakings. There can be no assurance that exploration of the Tenements, or any other tenements that may be acquired in the future, will result in the discovery of an economic mineral deposit. Even if an apparently viable deposit is identified, there is no guarantee that it can be economically exploited.

The Company is also undertaking Secondary Offers in connection with the Acquisitions.

The Secondary Offers are being made under this Prospectus to remove the need for an additional disclosure document to be issued upon the sale of any Securities (or any Shares issued on exercise of conversion of any convertible securities into Shares) that are issued under the Secondary Offers.

1. Before costs of the Offers

2. These options are proposed to be issued by way of a bonus issue to Eligible Shareholders prior to or contemporaneously with, completion of the issue of the Securities under the Public Offer. This number may be less depending on the total holdings of Eligible Shareholders as at the Bonus Issue Record Date.

3. A further 13,000,000 Deferred Consideration Shares may be issued to the Vendors if the Milestone is met. See Section 9.2 of the Disclosure Document for details.

5. Refer Section 2.2(d) of the Disclosure Document for details of the Peregrine Offer, and Section 9.5 for the Peregrine Mandate.

Capital Structure on the assumption that the Maximum Subscription is raised and that no other Shares are issued (refer Section 2.5 of the Disclosure Document for further details):

More on the Projects 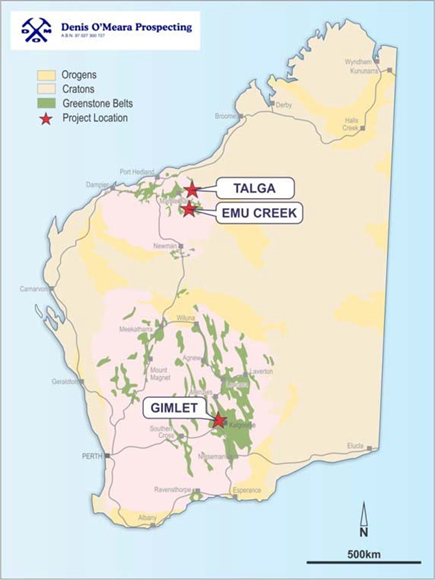 The dates shown in the table above are indicative only and may vary subject to the Corporations Act, the Listing Rules and other applicable laws. In particular, the Company reserves the right to vary the Opening Date and the Closing Date without prior notice, which may have a consequential effect on the other dates. Applicants are therefore encouraged to lodge their relevant Application Form and deposit the Application Monies as soon as possible if they wish to invest in the Company. The Company also reserves the right not to proceed with any of the Offers at any time before the issue of Securities to Applicants. If the Offers are cancelled or withdrawn, all Application Monies will be refunded in full (without interest) as soon as possible in accordance with the requirements of the Corporations Act.

The Company’s exploration team is being led by Brian Richardson as Exploration Manager and Chief Consulting Geologist.

Brian is a Pilbara veteran with 35 years Australian and international experience. He was a founding director of Thundelarra Resources Ltd and Royal Resources Ltd.

Additionally, Brett Keillor has joined the Company as Consulting Geologist. Brett is a geologist with 30 years’ experience in the mining industry working across a diverse range of commodities and was recently Chief Consulting Geologist for Independence Group Ltd and remains as a consultant.

The Company also has the benefit of ongoing access and commitment from Denis O’Meara and the team at Denis O’Meara Prospecting with an established base in the Pilbara and Denis’ experience and assembled knowledge base in respect to the projects and the region.