Constellation Resources Ltd holds an interest in the Orpheus Project, located in the Albany-Fraser Orogen, commonly referred to as the Fraser Range province, which is considered prospective for nickel, copper and gold.

The aim for the first two years of exploration is to:

Raisebook has secured an allocation in this IPO, and is accepting bids between $4,000 and $8,000 per entity on behalf.

Offer closes at 5pm AEST, 5 July 2018. However, the Company reserves the right to close earlier.

On the basis that the Company completes the Offer on the terms in this Prospectus, the Company’s capital structure will be as follows:

More Details on the Orpheus Project

The AFO Fraser Zone mafic-ultramafic intrusive suites have long been viewed as prospective for potential nickel-copper-cobalt (Ni-Cu-Co) magmatic sulphide systems, with exploration for nickel in the region dating back to the 1960s, culminating in the discovery in 2012 of the Nova-Bollinger nickel-copper-cobalt deposit. The Nova-Bollinger system is currently being mined by IGO.

The most important gold deposit in the region is the Tropicana gold deposit operated by Anglogold Ashanti Australia Pty Ltd (70%) in joint venture with IGO (30%).

The mineral deposit is hosted in tectonically reworked Archaean rocks that form the eastern margin of the Yilgarn Craton, Western Australia, on the margin of the AFO. 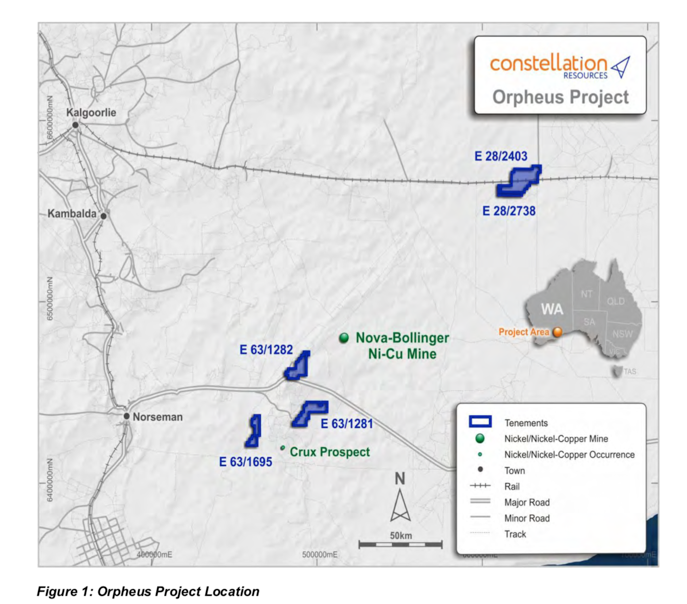 Gravity surveys completed in 2017 have resulted in the identification of two priority nickel-copper sulphide targets on E28/2403.

Following completion of the offer, the company plans to undertake systematic exploration activities on the Orpheus Project to determine potential.

The Board has extensive experience in mineral exploration, project development, mining and financing in the resources industry.

Mr Woodman most recently held the position of Chief Geologist at Regis Resources Limited where he oversaw exploration and resource development activities for its WA and NSW projects.

Mr Behets has had extensive corporate and management experience and has been Director of a number of ASX-listed companies in the resources sector including Mantra Resources Limited, Papillon Resources Limited, and Berkeley Energia Limited.

Mr Behets was instrumental in the founding, growth and development of Mantra, an African-focused uranium company, through to its acquisition by JSC Atomredmetzoloto for approximately A$1 billion in 2011.

Prior to Mantra, he held various senior management positions during a long career with WMC Resources Limited.