The Company has resolved to reduce the minimum subscription down to 20 million Shares to raise $6,000,000.

As of the date of the Third Supplementary Prospectus, the Company has:

Together, the documents form the Disclosure Documents for the Offer, and they can all be downloaded by clicking "ACCESS DISCLOSURE DOCUMENTS" on this page. If you do not fully understand them you should consult your professional advisers without delay.

The company’s experienced management team has considerable expertise and global experience in exploration, mining and finance, and key personnel have a track record of exploration success in the region.

Since inception in 2011, Canterbury has built a well-balanced and highly prospective portfolio of resource opportunities in Papua New Guinea, Queensland and Vanuatu.

Successful exploration and assessment activity at several of these projects has been advanced to the exciting drill testing phase — with drilling programs currently being implemented, and further drilling planned during 2019.

Each of these projects provides potential to delineate Tier-1 deposits.

The majority of funds raised by this Offer will be directed at high impact drilling activity at two of the Company’s 100% owned copper-gold prospects (Briggs and Ekoato), generating considerable value uplift for shareholders if successful.

This Update contains photos of exploration progress and can be downloaded by clicking through on this page. However please note, this document was prepared by Canterbury Resources as a summary for general information purposes only, and is not a prospectus, disclosure document or offer document under the Corporations Act 2001.

The drilling of the first diamond drill hole (BISM0001) is currently drilling ahead at 160m (as at 10/12/18), to a target depth of ~600m. Visual assessment of the core to date has noted alteration and geology generally consistent with pre-drilling interpretation of the target location.

At the 100% owned Ekuti Range Project, preparations are well advanced for the initial drilling of the Ekoato prospect, which will commence immediately following the close of the IPO.

The Ekoato drill program will test targets that display many characteristics comparable with the world-class Golpu deposit (owned by Newcrest Mining 50% and Harmony Gold 50%) located some 60km to the north.

Construction of the drill camp and helipad has been completed and initial supplies delivered. Drill sites have been established at two of the five proposed drill locations.

At Briggs, planning is well advanced for a 9-hole diamond drilling program to further assess the resource potential of the large Briggs porphyry copper system.

The drilling program is planned to commence in early 2019 and will further assess the Central Zone of the Briggs deposit, testing for a potential higher-grade core of the system at depth.

Canaccord Genuity has been appointed Lead Broker for the IPO.

The majority of funds raised by the Offer will be directed at high impact drilling activity at two of the Company’s 100% owned copper-gold prospects — Briggs and Ekoato.

Raisebook is accepting bids of between $2,100 (minimum) and $6,000 (maximum) per entity registered with Raisebook.

Investors should note that all of the Company’s projects are still in the exploration and evaluation phase. Accordingly, any investment made in the Company should be considered highly speculative.

An investment in the Company is also subject to risks, including Company specific risks such as those associated with mining and exploration, commodity price fluctuations, currency exchange and country risks associated with operating in Papua New Guinea, Vanuatu and Australia, and general risks such as adverse weather.

Summary of the Offer:

Options granted at the Date of the Prospectus:

Options to be granted upon completion of the Offer under this Prospectus:

The Ekaoto project is in PNG, where a 5-hole diamond drilling program of around 1,350 metres will test an extensive area of surface gold and copper mineralisation in the upper levels of an exposed porphyry system.

The Ekoato prospect has not previously been drill tested and displays many characteristics comparable with the world-class Golpu deposit located some 60km to the north.

Significantly, several members of Canterbury’s exploration team had integral involvement in exploring the Wafi-Golpu complex, including drilling of the discovery hole at Golpu.

This region hosts some of the world's largest gold-silver and copper-gold deposits including:

The Briggs project is in Queensland, where a 9-hole diamond drilling program of around 3,000 metres will further assess the resource potential of the large Briggs porphyry copper system.

During the next phase of assessment, Canterbury will undertake an initial drilling program focussed on mineralisation in the Central Zone, including testing for a potential higher-grade core of the system.

The Bismarck project is on Manus Island, PNG, where an initial drilling program of 3 to 5 deep holes (each up to 600m) will test large porphyry copper-gold targets.

Bismarck is the subject of a staged Farm-In and Joint Venture Agreement with Rio Tinto PNG. 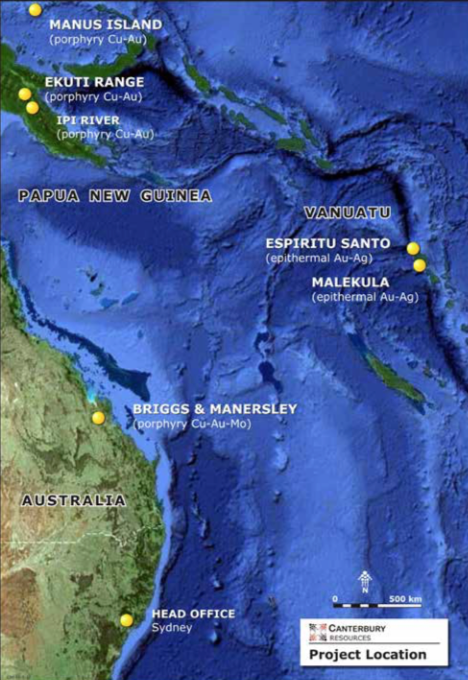