One of the Largest Undeveloped Gold Projects in Europe

Black Dragon Gold Corp. (TSX- V:BDG, FWB:BCD) (the Company) is embarking on a proposed listing on the ASX, and is inviting investors to participate.

The re-launch of this Company is under a new executive team, with the objective to further explore and ultimately develop its 100% owned Salave Gold Project (Project) in the Asturias region of Spain to create value for shareholders.

The Project is technically robust, situated in a highly prospective region, and widely recognised as one of the largest undeveloped gold projects in Europe.

At present, the Salave Gold Project contains a combined Measured, Indicated and Inferred JORC Mineral Resource of over 1 million ounces of gold, of which 944,000 ounces is categorised as Measured and Indicated (6.52M. tonnes), with a grade of 4.5 grams of gold per tonne of ore.

The Company considers the Mineral Resource has considerable potential to grow along strike and at depth with further drilling.

To this end, drilling at the Project re-commenced in late January 2018. Initial highly encouraging results from the first two drill holes completed were announced by the Company on 5 April 2018, and the remainder of the assay results is expected to be available in the third quarter of calendar year 2018.

Following receipt of all new drilling information and assay results, the Company expects that it will be in a position to update the JORC Mineral Resource estimate in the second half of calendar year 2018. Shortly thereafter, the Company plans to deliver the results from an updated Preliminary Economic Assessment.

The issuer of the Prospectus is Black Dragon Gold Corp. (ARBN 625 522 250) (Company), a company incorporated in, and registered under the laws of, the Province of British Columbia, Canada, with incorporation number BC0800267.

Hartleys has been appointed as the Lead Manager to the Public Offer.

The purpose of the Public Offer is to raise a minimum of A$4,000,000, and a maximum of A$6,000,000 (in each case, before costs and the exercise of Free Attaching Options), by the issue of CHESS Depositary Interests (CDIs) over fully paid ordinary shares in the capital of the Company (Shares).

The CDIs will be issued at a ratio of 1 CDI for 1 Share.

This offer will close by 5pm AWST today, 24th July.

Potential investors should understand that mineral exploration and development are high-risk undertakings. There can be no assurance that exploration and development of these permits and concessions, or any other permits or concessions that may be acquired in the future, will result in the discovery of further mineral deposits. Even if an apparently viable deposit is identified, such as the Mineral Resource at the Project, there is no guarantee that it can be economically exploited.

The proceeds of the Public Offer are intended to be utilised to enable the Company to understand the extent of the Project’s gold mineralisation and deliver an updated Mineral Resource Estimate and advance permitting of the Project with mine development planning, metallurgical test-work, environmental studies and permitting studies.

Securities on issue immediately prior to Admission:

Securities on issue upon Admission:

Note: For further details on the Key Offer Statistics, please refer to the Disclosure Document.

ASX uses an electronic system called CHESS for the clearance and settlement of trades on ASX.

The Company is incorporated in British Columbia, Canada, and the requirements of British Columbian laws that registered shareholders have the right to receive a stock certificate does not permit the CHESS system of holding uncertificated securities.

Accordingly, to enable companies such as the Company to have their securities cleared and settled electronically through CHESS, depositary instruments called CDIs are issued.

CDIs represent the beneficial interest in the underlying shares in a foreign company such as the Company and are traded in a manner similar to shares of Australian companies listed on ASX.

Will the CDIs be quoted on ASX?

The Company applied to ASX within seven days of the date of the Original Prospectus for official quotation of its CDIs on ASX under the ASX Code “BDG”.

Admission is conditional on the ASX approving this application. If approval is not given within three months of the date of the Original Prospectus (or any longer period permitted by law), the Offers will be withdrawn and all Application Monies received will be refunded without interest as soon as practicable in accordance with the requirements of the Corporations Act.

Note: The above dates are indicative only and may change without notice.

Overview of the Salave Gold Project

Salave is a technically robust project situated in a highly prospective region and recognised as one of the largest undeveloped gold projects in Europe.

The Project has had some €55 million spent on its development and resource definition.

Included in the measured and indicated resources is a higher grade body of mineralisation defined by a 3.0 g/t Au cut off totalling 3.60 M. tonnes grading 6.19 g/t Au containing 716,000 ounces of gold, that is potentially amenable to underground mining. 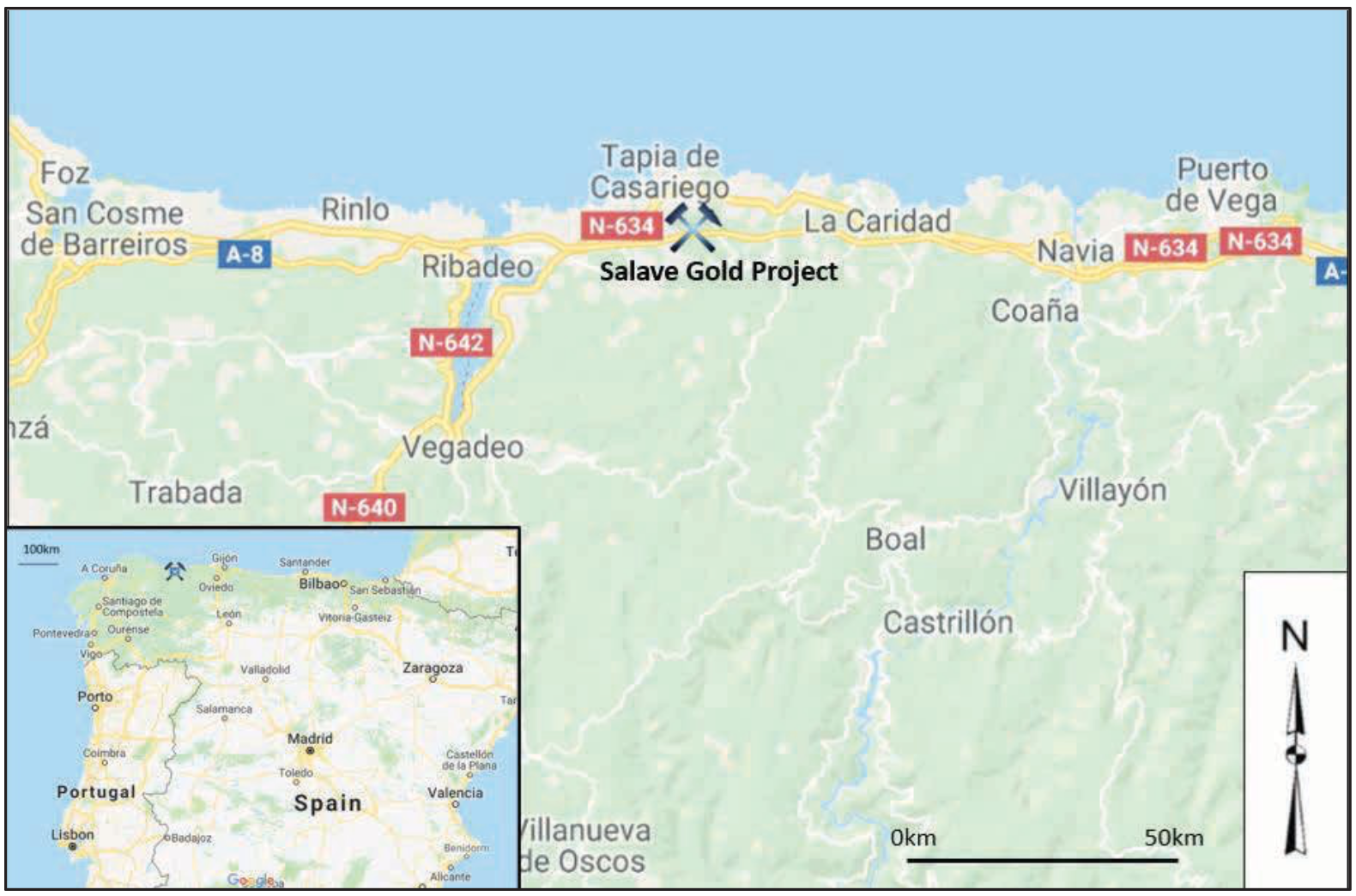 The Project is comprised of five, 30 year-term mining concessions (renewable up to 90 years) over the resource area. The Company also holds an investigative permit adjacent to the Concessions.

Collectively, the Concessions and the Investigative Permit cover an area of 3,426.97 hectares. Within the Concession boundaries, the Company owns 109,753 m2 of freehold land over the surface mineralisation.

A prominent geophysical anomaly coincident with favourable geology, alteration and mineralisation defines a significant gold target that prompted intense drilling campaigns by major gold companies resulting in some 69,000 metres of drilling plus extensive social, environmental and engineering studies and testwork.

There is existing infrastructure and resources in and around the Project, making this location ideal, including:

Considerable Upside to Be Explored

Following listing on the ASX, the Company plans to submit plans for a larger exploration drill programme to better understand the extent of the Project’s gold mineralisation.