The Supplementary Prospectus is intended to be read with the prospectus dated 28 March 2018 (Prospectus) issued by Awati Resources Limited (ACN 106 020 419) (Company).

Both documents together are the 'Disclosure Documents' for this offer. Both are available by clicking the ACCESS DISCLOSURE DOCUMENTS button on this page.

Other than as set out below and as included in the Supplementary Prospectus, all details in relation to the Prospectus remain unchanged.

The Company is currently seeking to raise funds through an Initial Public Offer to continue exploration drilling at its Tibooburra Project in the Albert Goldfield in north-western New South Wales.

Significant alteration and visible gold was intersected in fresh rock under thin cover at New Bendigo.

Significant alteration with quartz and sulphide were encountered from surface or under shallow cover at New Bendigo and The Kink and under moderate cover at Jerakeen.

Fresh rock intersections of interest have been returned from testing along and near the New Bendigo Fault.

To date no assay results have been received for the RC programme. An intensive exploration effort in the New Bendigo, Jerakeen and The Kink area is proposed to continue once the Offer has been completed.

The above and other field observations at New Bendigo, Jerakeen and The Kink are listed in detail in the Disclosure Documents and summarised further below.

The observations are interpreted to be significant in that they indicate the presence of a hydrothermal system over a significant strike extent.

This includes at the Jerakeen prospect (which is located between New Bendigo and The Kink) where there has been no previous drilling conducted.

A total of 9 RC holes were drilled at New Bendigo for 1,059m to follow-up earlier encouraging results from diamond and RAB drilling.

Visible gold was intersected in hole AW18RC004 from 103 to 104m in one of numerous rock chips washed and viewed from a small non-representative portion taken from the top of the near 20kg sample bag. 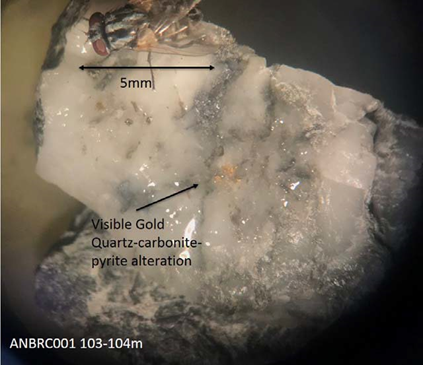 Wide spread quartz-carbonate alteration with sulphides was also observed in most drill holes.

The sulphides include abundant pyrite with zones containing minor arsenopyrite, galena and sphalerite.

The recent RC drilling will be used to establish the continuity and plunge direction of higher grade zones at New Bendigo.

In hole AW18RC015 from 71m to 98m (28m down hole) multiple quartz veins with pyrite and arsenopyrite with traces of galena and sphalerite were logged.

Sulphides, including arsenopyrite, and quartz were also noted in other holes at Jerakeen.

Hole AW18RC023 contained variable quartz with alteration from 31m which extended for 128m down hole.

Further RC drilling is planned after gold assay results from the current drilling programme have been received, assuming the successful completion of the Offer.

The second phase of RC drilling is intended to follow-up and further define the encouraging results received to date and those returned from the current drilling.

The Company intends to further test targets and in-fill along strike from New Bendigo, Jerakeen and The Kink to test the favourable New Bendigo Fault and its associated splay structures.

The dates referred to in the Disclosure Documents have been altered.

We have been informed by the Company that the Closing Date of the Offer has been extended to Friday 1 June.

Summary of Offer from Prospectus

Awati Resources Ltd is focused on discovering a high-grade gold resource located at the Company’s Tibooburra Project in the Albert Goldfield in north-western New South Wales.

The company is seeking to raise a minimum of $4.5 million with the right to accept oversubscriptions to raise up to a further $1 million for a maximum of $5.5 million as part of an IPO and ASX listing.

The Company’s founders first started evaluating the Tibooburra region in 2004, with the majority of the Company’s tenements being acquired in 2017 and 2018 following the Company’s interpretation that a large, regional-scale fault, visible in gravity and magnetic images, is likely to be important in controlling the emplacement of gold mineralisation.

The fault is predominantly under shallow soil cover sediment and is closely associated with known mineralisation.

The Company was attracted to the project due to its prospective geological setting within a proven mineralised mining area and lack of modern exploration as the tenements were previously held by private prospectors or companies focused on alluvial gold.

This area has been tested in select locations, some of which have been found to host gold mineralisation.

With limited drilling completed along strike to date, the Company intends to focus its efforts on identifying mineralisation along this highly prospective structural corridor.

The Company’s previous exploration activities, including a diamond drilling program conducted in late 2016 and a passive seismic survey, has provided excellent information to assist in geological interpretation and target generation, including over areas with shallow cover.

The key purpose of the Offer is to provide additional funds to advance exploration on the Tibooburra Project following the successful listing of Awati on the ASX.

With previous exploration providing “drill ready” targets to test, the Company plans to rapidly commence a 6,000 metre drilling campaign upon the Company’s admission to the Official List.

Potential investors should understand that mineral exploration and development is a speculative and high-risk undertaking that may be impeded by circumstances and factors beyond the control of the Company. There can be no assurance that exploration on the Projects, or any other exploration properties that may be acquired in the future, will result in the discovery of an economic mineral resource.

Note: Subject to any ammendments required by the ASX, one Performance Share will convert into one Share upon satisfaction of any of the following milestones:

(i) the announcement of a JORC 2012 compliant resource of at least 500,000 ounces of gold at the Project, using a minimum cut-off grade of 0.5 g/t Au, of which at least 33% of the JORC resource is in the Indicated and Measured category;

(ii) all or substantially all of the Project being acquired by a third party (by way of sale, license, lease or disposition) in a single transaction or a series or related transactions for consideration of at least $20,000,000;

within 36 months from the date of quotation of the Shares on the Official List.