Australaisan Gold Ltd (proposed ASX code A8G) is a mineral exploration company focused on delivering shareholder value through the identification, development and acquisition of exploration properties, focusing on mining tenements prospective for gold and other minerals, initially in Queensland and Western Australia.

The Company intends to take its portfolio of Australian gold exploration assets to the next stage of their development through an Initial Public Offering on ASX.

The price of gold has enjoyed significant gains over the last 5 years coinciding with highly accommodative global monetary policies, such as successive programs of quantitative easing in the US, Europe and Asia.

While the price of gold and the valuations of many gold mining companies has increased significantly in recent years, the Company’s board believes that good quality gold exploration assets with confirmed mineralisation in Tier 1 mining jurisdictions such as Australia, can still represent compelling value in the context of current gold prices.

Immediately following the proposed ASX listing, the Group will launch exploration programs on its flagship May Queen gold project, located in the Brovinia gold field in Queensland and the Mt Clermont project in the Drummond Basin, central Queensland.

Star Resources Ltd's Paulsens Gold mine) once this tenement application is approved.

The initial exploration programs will be designed to better understand the structural and depositional geology of the licence areas in order to then develop further exploration programs that will be focused on the expansion of existing known mineralisation and the potential discovery of new deposits.

The primary purpose of the Offer is to provide funds to undertake systematic exploration of these programs at the Projects with the ultimate goal to define a mineral resource that can be taken through to production, and to also raise the Company’s profile through listing on the ASX.

The Lead Manager to the offer is Euroz Hartleys.

Investors should be aware that there are risks associated with an investment in this Company.

Exploration is speculative; there is a high risk of cost overruns, time delays and exploration not being successful.

A complete set of risks associated with an investment in the Company is included in Section 6 of the Disclosure Document. Investors should consider those risks carefully in deciding whether to invest in the Company.

Key Statistics of the Offer

Note: Subject to all applicable laws and listing rules, the Company reserves the right to close the Offer earlier than indicated above without prior notice.

The Company is focused on early-stage mineral exploration, with a particular focus on gold and precious metals.

The Company currently has 3 projects; 2 of which are granted (May Queen and Mt Clermont) and 1 application (Fairview). 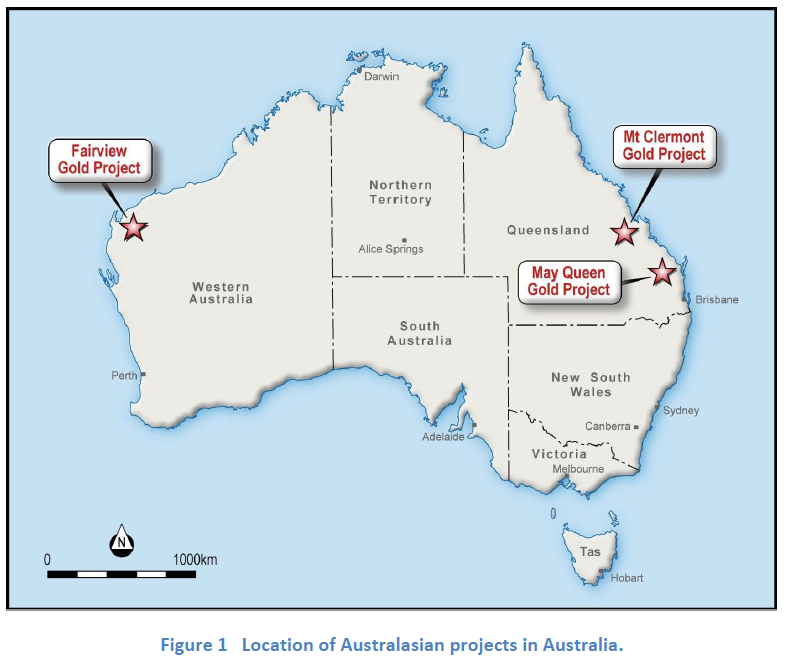 The May Queen project is located in the Brovinia goldfield in Queensland.

The project has been subject to historical exploration including an 8 hole RC drill program undertaken by IronRidge Resources in 2015.

The Company has purchased the project from IronRidge Resources Limited.

The Mt Clermont project is approximately 60km by road north-west of the town of Emerald, Central Queensland.

Over 6,700m of historical drilling has been completed showing potential for a high grade polymetallic epithermal system.

The previous owners of the project, Invictus Gold and Impact Minerals, carried out exploration at Mt Clermont between 2016 and 2019.

This work included mapping and collecting grab samples, RC drilling and an IP geophysical survey along the Retro FaultSystem, a gold-bearing quartz reef/vein system, to confirm the potential for epithermal mineralisation over its 10 km of strike length.

A mineralized vein system was defined by this drilling over 350 m of strike and 75 m depth.

The Fairvew project consists of a tenement application by the Company over 38 km2 of prospective ground approximately 30 km’s to the south west of Northern Star’s Paulsens Gold Mine.

The exploration target is structurally similar to the Mt Clement deposit (less than 5km to the south east) and the Paulsens Gold Mine, operated by Northern Start Ltd (ASX:NST).